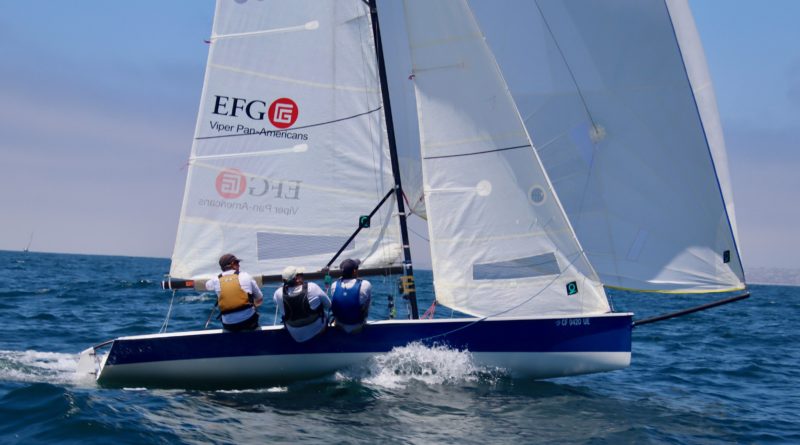 REDONDO BEACH—Two-dozen sailboats took the water on July 13 to compete for the Tom Collier Memorial Trophy and raise funds for cancer research. The Cure Cancer Cup – and its competitors – ended up raising $20,000 for the Cedars-Sinai Research Lab. King Harbor Yacht Club, which hosted the 28th edition of the regatta, has raised almost $700,000 for cancer research.

Sailboats and high-performance catamarans, measuring 18 to 40 feet, raced against each other in an inverted start pursuit. The trophy up for grabs was named after Tom Collier, who died of cancer at the age of 31.

“His fellow sailors determined that they would establish this regatta in his honor, to support research to cure this disease,” an official statement on the Cure Cancer Cup said. “Since its inception, this regatta has raised almost $700,000 for cancer research. The proceeds all go directly to research at a lab that has been named for the event.”

Michael McKinsey and his Catalina 27 Main Squeeze won the cruising class, while Burr Hope was the Cal 20 class aboard Déjà Vu.”

“In such a ‘pursuit race’, with a wide mix of boat types, the slowest boats start first, and the fastest boats start last – the first boat to the finish line wins! The fastest boat started one hour after the slowest boat, and after 10 miles of racing, many of the boats arrived at the finish line at nearly the same time,” a released statement about the Cure Cancer Cup said. “The entire course could be viewed from the upper deck of the KHYC clubhouse, and the spectators were treated to some exciting finishes.”

An awards party was held after racing; sailing teams were treated to appetizers, sliders and a live band. There were also auctions (silent and live) and a drawing.