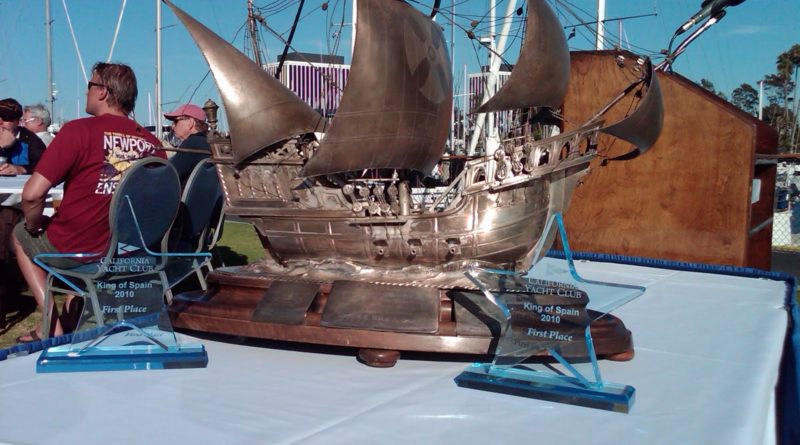 This year’s King of Spain Regatta will be held at California YC just before the 2018 Star North American Championship, offering competitors a chance to become familiar with local conditions in the middle of summer.

The entry fee is $55 for anyone registering before Aug. 3 and $65 after. Sailing instructions will be available on Aug. 8. All entries must be registered by Aug. 10. Racing will take place in Santa Monica Bay, 1 mile northwest of the Marina del Rey breakwater; the course will be windward/leeward.

Last year’s King of Spain Regatta was held on July 22-23, 2017; 15 teams competed against each other for the right to have their names etched onto the perpetual trophy.

“Eric Doyle and Peyton Infelise, sailing for San Diego Yacht Club, finished atop the leaderboard for the second year in a row, with a commanding lead that allowed them to sit out the last race,” the official California YC recap of last year’s race stated. “The Olympic gold and World Championship team of Mark Reynolds representing SDYC, with CYC member Hal Haenel as crew, had the best read of Sunday’s conditions, delivering a 2-4-1 record that vaulted them into 2nd overall.

The King of Spain perpetual trophy was acquired from the Spanish monarchy in 1929 and designed to promote Eight Meter racing on the West Coast. It was re-dedicated to California YC by Owen Churchill, who won the trophy several times for his multiple Eight Meter victories.

Alfonso VIII was the King of Spain from his birth until 1931. The Spanish-American War, which eventually resulted in Spain losing colonial rule over Cuba, Guam, the Philippines and Puerto Rico, was fought during his regency.

Those participating in the King of Spain Regatta are permitted to use the California YC facilities during the event. Complimentary refreshments will be available throughout the race. The club’s docks are also available to competitors beginning Aug. 8; teams competing in both the King of Spain Regatta and 2018 Star North American Championship are permitted to use California YC’s dock space through Aug. 22.

Contact Regatta Chair Marylyn Hoenemeyer at 2018kingofspain@gmail.com or at 310-472-3577 for more information. Questions can also be directed to Evan Davis at evan.davis@calyachtclub.net or at 310.823.4567.

Information about trailer storage or dock space should be directed to club’s dockmaster.