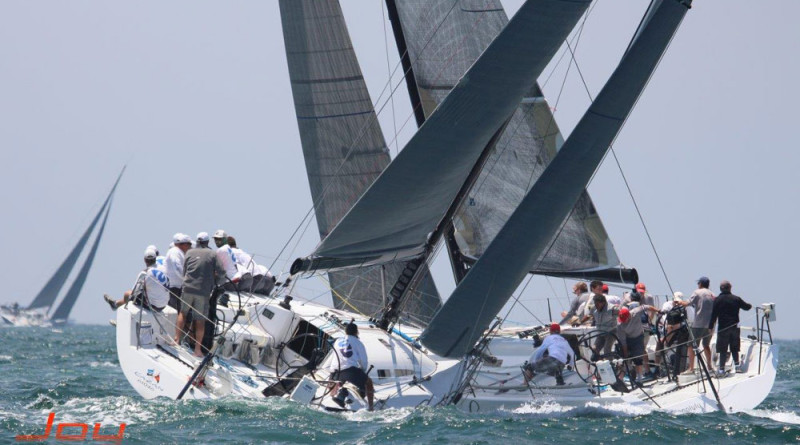 After three days of exciting and sometimes challenging racing, Alamitos Bay YC’s Bruce Golison aboard Midlife Crisis was awarded the One Design Boat of the Week; while PHRF Boat of the Week Honors went to David Team’s Rebel Yell, of Newport Harbor Yacht Club.

The coveted Yacht Club Challenge went to Alamitos Bay YC competitors Chuck Clay in the Catalina 37 fleet, Pete Melvin in the multihull division and Viper racer Kevin Taugher. The Yacht Club Challenger winner is based on the cumulative score of teams of three yachts, in separate classes. One of the three boats must be a Catalina 37 and factors in the number of competitors in each of the team member fleets.

In the J/70 fleet, Golison held the lead over the 19-boat fleet, wining his division and Ullman Sails LBRW Boat of the Week in the One Design category. He was followed by Minor Threat and Catapult.

In other race categories, Medicine Man edged out Velos in a tiebreaker, in PHRF-RL-1. In PHRF-RL-2 Gator, with six points, held of an attack by Green Dragon 2 and Tigris, tied at eight points. Other winners were J/20, Caper; PHRF 1, Tai Kuai, PHRF 2, Mexican Divorce; Farr 40, Blade 2. In PHRF 3 Lugano edged out Rival by one point, while Off the Porch shut the door on Ceann Saile in PHRF 4. Code Blue was named the Schock 35 Pacific Coast Champion and Electra was declared the J/109 West Coast Champion.

Hot Mess cleaned up in the Viper 640 fleet and was awarded the Boat of the Day, June 26.