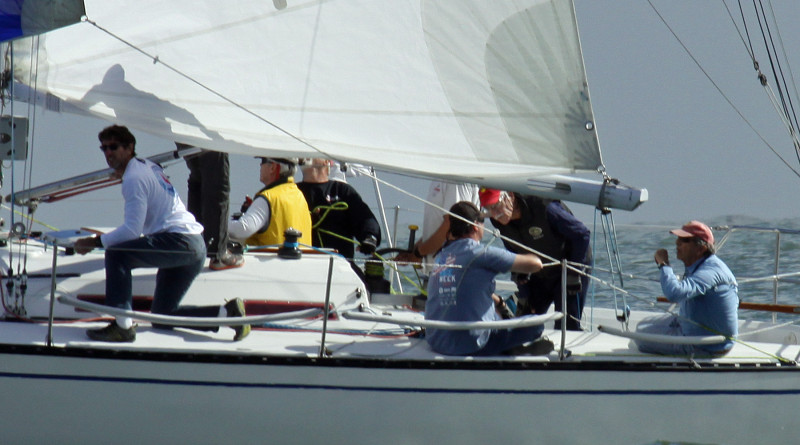 LONG BEACH — Sam Heck and Merry Cheers decided that just having bought a new Farr 40 race boat, Viva La Vida, wasn’t quite enough. They wanted to race it, right away. So they entered the 2017 Southern California Yachting Association Midwinter Regatta through Long Beach Yacht Club, which hosted their class, and won in the first racing sailboat that they have ever owned.

“We were lucky and had good starts,” said Heck. “[Ray Godwin’s] Temptress was our race. They were fast and were always close to us.”

“This was really fun for us,” said Cheers, “to get to race on our own boat… and win!”

“This regatta was a lot closer than the scores indicate,” said Marcus. “We only won by half a boat length in every race.

“In the last race at the leeward gate, [Roland Duphily’s] Impulse was actually winning the regatta. We were tied in points when they went to the west gate and we went to the east gate. We sailed into and out of a hole and ended up winning the race. This fleet, in general, is really tightening up.”

Moving towards the weekend’s racing Southern California was bracing for what was being called an “epic storm” by the media. Hammering the coast during the afternoon of Feb. 17 with flooding, downed trees and power lines, anxious sailors were wondering if the event organizers would even be able to get the regatta started on Feb. 18.

The morning of Feb. 18 dawned with dark skies, moderate breezes of 8-12 knots and on-and-off showers. The race committee determined they had acceptable conditions for racing and took the fleet out, completing three of the five scheduled races in good time with no delays for weather.

The race committee had challenges on Feb. 19 with post-storm conditions of confused and inconsistent breezes that delayed the start of the first of two races by about an hour. Once the breeze settled in at about 7-8 knots, they were able to get both races done, completing the regatta.

“Everyone on the race committee did a really good job,” said Heck.