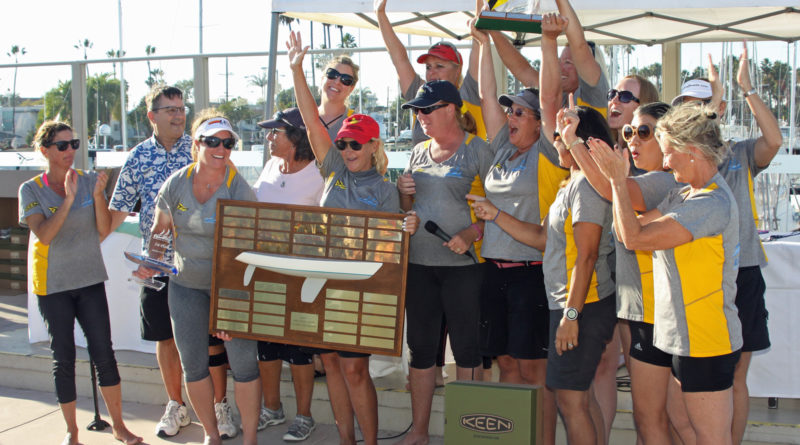 The last time Long Beach YC won the LEWWOD Challenge was in 2003, coincidentally, the same year the namesake for this race died.

Linda Elias won the all women’s regatta three times and was a recipient of the “Yachtswomen of the Year” award. She lost her battle with ovarian cancer in 2003. Her name was added to the title of the race to honor her as a champion sailor and member of Long Beach’s Women’s Sailing Association.

Long Beach/Los Angeles Women’s Sailing Association, sponsor of the all-women’s regatta, “rededicated the event in her memory,” a press release on the race stated.

Why did a Long Beach YC team take 14 years to win this race again?

“There was an absence of a formal team at Long Beach Yacht Club,” Meier answered.

The reason for this, she believes, is because the women went in different directions with match racing and other racing classes.

Meier and Corzine placed second in 2015 as co-skippers in this regatta.

“So close and yet so far,” Corzine said.

What did this achievement, after so many years, mean to the winners?

The win meant a great deal for Corzine, who grew up in the Long Beach YC sailing program. She watched her own mother race in this competition for years. Her family was close to Elias; her father competed with Elias in the Transpac race.

“To come in on the dock and have my mom there with my daughters and have it all just come full circle – it was a big day,” Corzine said with emotion.

Corzine credits the win to the Long Beach YC male members’ coaching and to all the women on the team giving it their all and “checking their egos at the dock.”

Corzine and Meier are often rivals in sailing competitions, but they came together as co-skippers on this winning team.

Corzine says there is “nothing but love between us.”

“We’re always rooting for each other,” she added.

The 13 women practiced as one team on the water only twice before the LEMWOD Challenge, according to Meier. They finished first out of 11 teams.

Meier described all the female sailors participating in the challenge as fierce competitors on the water but friends on land. She has only been racing for seven years, and like Elias, achieved the title of “Yachtswomen of the Year.”

“Wendy and I do a good job working together. She does the strategy and tactics. I love the management of the team,” Meier told The Log.

“So in much the same way as Linda Elias and [her sailing partner] Camille Daniels, they both appreciated [each other] and were able to play to both of their strengths,” Meier continued. “We are very proud that we were emulating that team.”

Meier said they put pressure on themselves to win the trophy for Long Beach YC.

“What is even more meaningful for us is that we had the entire club supporting us and cheering for us no matter what the outcome was,” Meier added.

Corzine expressed her gratitude to Long Beach YC as well.

“The whole team is so appreciative of all the support we’ve gotten from the yacht club,” Corzine stated. “We couldn’t have done it without that.”

Both Corzine and Meier said they, with the team, plan to compete again next year.

Meier, who is also one of the chairs of the regatta, said the long-term goal is to get more young people out on boats and groom them, so “we can maintain the legacy of Long Beach YC having a great team of female racers.”

The Women’s One-Design Challenge began in 1991 to provide a race for women to compete against each other in Catalina 37s.