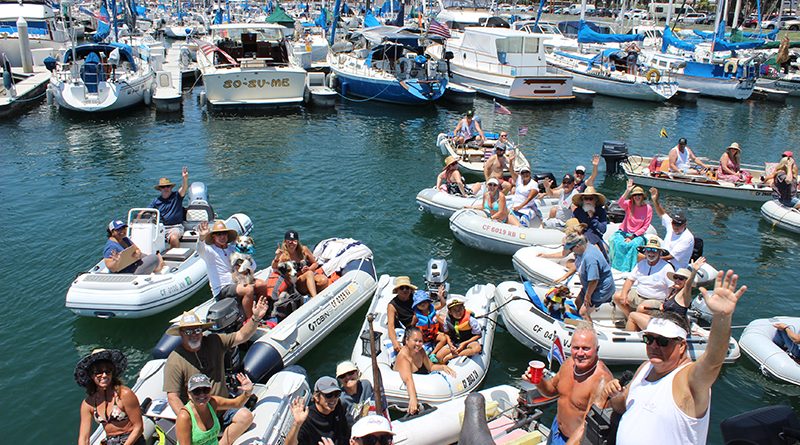 LONG BEACH一 Thirteen dinghies gathered around the back of the two-tiered powerboat as Steve Hyham, co-founder of Low Tide Yacht Club, gave the opening speech and laid down the rules for the 2nd Annual Dinghy Poker Run.

Jimmy Buffet was playing low from a boat stereo and a summer breeze came off the water cooling off the group of over 20 people gathered around to participate in the run. After a fair amount of heckling and last-minute checks, Brandy Hyham, co-founder of Low Tide Yacht Club, rang a large brass bell and the dinghies took off across the water set on a mission for the best five-card poker hand. 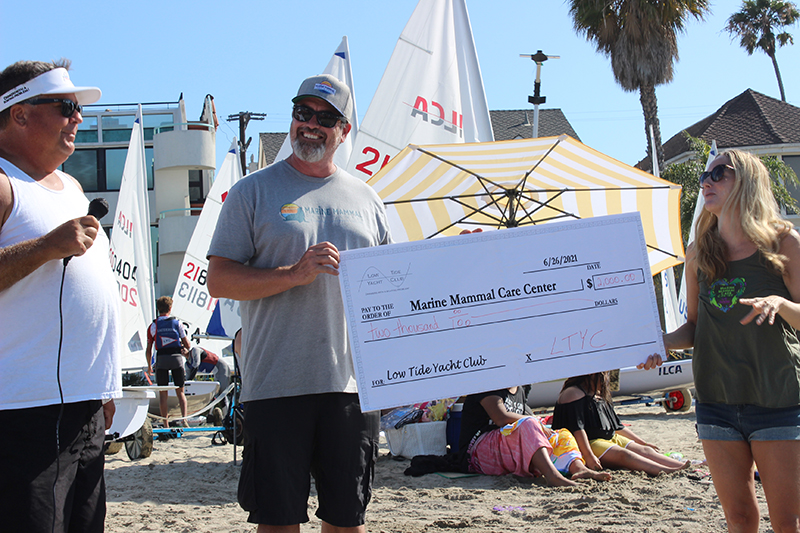 The event, open to all participants with a dinghy, winded its way through Long Beach Marina stopping at stations along the way, from the Naples Canal where a couple of Marines volunteering for the event used the house under construction as inspiration for a handy-man themed spot to the beach on the peninsula where the Marine Mammal Care Center had parked under an umbrella for the day to pass out poker cards and information about the center to participants.

The Low Tide Yacht Club got its start in the slip of water between docks 17 and 18 in 2019. A bunch of boaters floating around behind their boats, sharing beers and laughs, joined together to create their own club where they could share their love of boats, Jimmy Buffet, and a good time. Brandy and Steve Hyham were floating in the water behind their boat with their neighbor and friend Mark Rowen when the group began to toss around the idea of creating their own yacht club right there in the harbor where they could enjoy their friends and also raise money for charity.

“We wanted to have fun and a fun way for making money for charity,” said Mark Rowen, co-founder of Low Tide Yacht Club.

From a fleeting thought to putting pen to paper, the Low Tide Yacht Club drinkers with a boating problem became a reality. The club’s little community, recognized by the American Yacht Club Association in 2021, meets in-between dock 17 and 18 to hold charity events, movie nights in the water, and other group events throughout the year.

“I think the important thing is that we are a free club and this is really what we want to do with people’s money,” said Hyham. “Instead of having membership dues, we have no overhead, so our membership dues really go to charity. If someone can contribute $20, we will take it, if someone can do $200, we will take it. We really aren’t interested in how much money someone makes… Everyone is welcome, come down and have a good time.”

The event ended at 5 p.m. with a small celebration on the peninsula where the award for the best hand, a donated blow-up paddleboard, and the “biggest-loser” a large bottle of Kraken Rum, were passed out and a large $2,000 check to the Marine Mammal Care Center was gifted to representatives Dave Bader, chief operations and education officer, and Amber Becerra, president and CEO of the center.

This is the second year that the club has focused its event on the Marine Mammal Care Center, and according to Hyham the relationship will continue on to raise money for marine mammals.

“We love the ocean and it brings us joy, we want to take care of it,” said Brandy Hyham.

To learn more about the center see https://marinemammalcare.org/, and for more information on Low Tide Yacht Club see www.lowtideyachtclub.com.