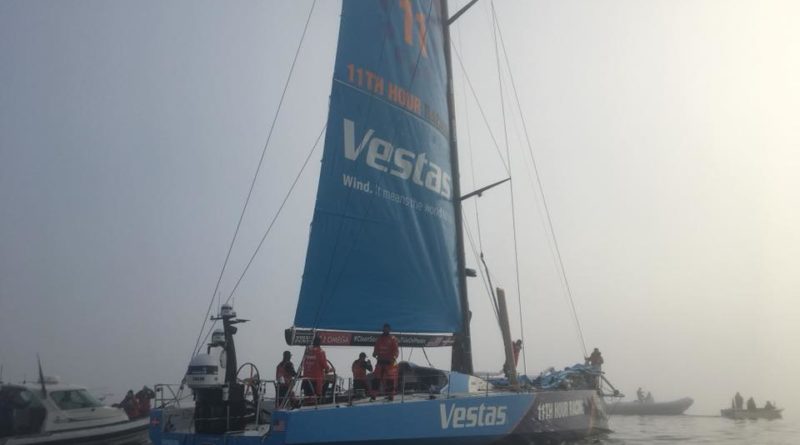 NEWPORT, Rhode Island (AP) — With the Volvo Ocean Race fleet ghosting toward the finish of Leg 8 in light, shifty wind, Spanish team MAPFRE emerged from the fog at dawn, May 8, and trailing Team Brunel with about 550 yards to go.

MAPFRE caught a puff of breeze on the approach to the final turning mark and passed Team Brunel to win the leg and cap a stunning comeback.

MAPFRE crossed the line 1 minute, 1 second ahead of Team Brunel, a remarkable result after sailing 5,700 nautical miles in 16 days from Itajai, Brazil.

“This is unbelievable,” MAPFRE skipper Xabi Fernandez said. “I can’t be happier. We were always hoping to come back a little bit but to be honest we were not expecting to win this leg, so we’re super happy. Our hopes were always that there would be a compression so we could catch someone. Last night has been crazy how much everything has closed up and everyone on board did an amazing job.”

MAPFRE had been in fifth place with 300 miles to go. The crew caught up and by early Tuesday was battling in slow motion with Team Brunel, Dongfeng Race Team and Vestas 11th Hour Racing.

The tide and currents near shore pushed around the 65-foot sloops, with boats at times even drifting backward, away from the finish line.

Skipper Bouwe Bekking said Team Brunel was “a bit disappointed. But we sailed a very good leg and we can be happy with our performance and how we were going.”

Team Brunel led for most of the past week after crossing the equator.

Dongfeng Race Team, which had been ahead on the approach to the East Coast on Monday night (May 7), was hurt the most by the fluky conditions and finished fourth.

“We’re very disappointed,” skipper Charles Caudrelier said. “We were dreaming about a victory here. But it makes me angry and I will be better on the next one. I am already focused on the future and I promise Dongfeng will do a fantastic job on the next one.”

MAPFRE regained the overall lead from Dongfeng in the bluewater classic, which has three legs to go. Brunel remains in third.

Fifth across the line was team AkzoNobel, which passed Turn the Tide on Plastic moments before the finish.

The light winds near the finish resulted in a massive compression in the fleet. SHK/Scallywag, which trailed the leaders by more than 130 miles a day earlier, was less than 20 miles behind when MAPFRE finished.