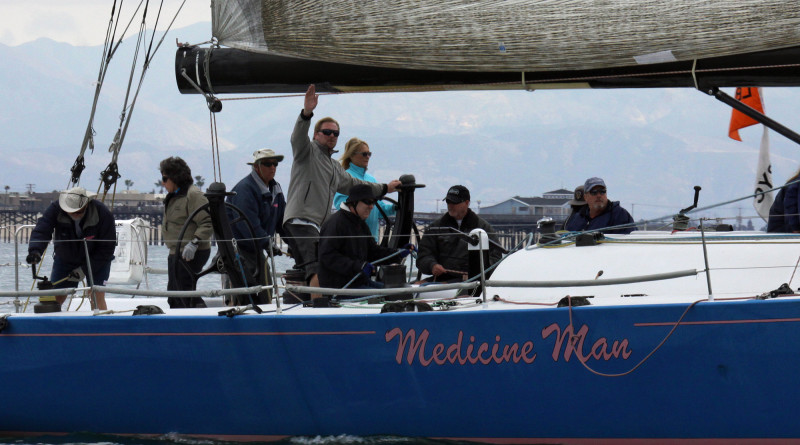 LONG BEACH — On a day that dawned with only a whisper of a breeze, the Long Beach Yacht Club race committee was able to pull off the 2016 Two Gates Pursuit Race with skipper Lisa Meier taking first overall and first in Class A on Bob Lane’s Andrews 63, Medicine Man, in this annual first-of-the-year race hosted by Long Beach YC.

Twenty-nine skippers and their teams hung out as the race committee waited for a bit of consistent breeze to get the fleet of various types of sailboats to the start line. The race was an inverted-start PHRF race where the slowest boats start first and the fastest boats start last in hopes of catching up.

After an hour-and-a-half postponement, the race committee started the first boat on the shorter, 5.17-nautical-mile Course 2 as opposed to the usual 13.2-nautical-mile course, which, if chosen, would have had most of the fleet finishing in the dark.

“This was really a privilege,” Meier said, “to have an offer to sail with Medicine Man’s crew who are some of sailing’s best. I had an incredible time on an incredible boat with the unbeatable support of my comrades. It was a privilege to drive this boat today.”

Medicine Man’s owner, Bob Lane, said, “The boat is geared for Southern California light air sailing. Keith Ives,” a regular co-skipper on the boat who drove the boat at the start, “is one of the best starters I’ve ever sailed with. Once he started the boat it just took off.”

LBYC re-invented their long-standing Two Gates Invitational race in 2012 and turned it into a pursuit race. But they didn’t change the 13.2-nautical-mile course which starts in Long Beach Harbor, takes the boats to Los Angeles Harbor and then back to Long Beach for the finish. It gets its name from the fact that the race boats weave in and out of Long Beach’s Queen’s Gate harbor entrance and Los Angeles’ Angel’s Gate harbor entrance.

This year, Long Beach YC added a shorter 5.17 nautical mile course as a backup in the event the weather didn’t cooperate.