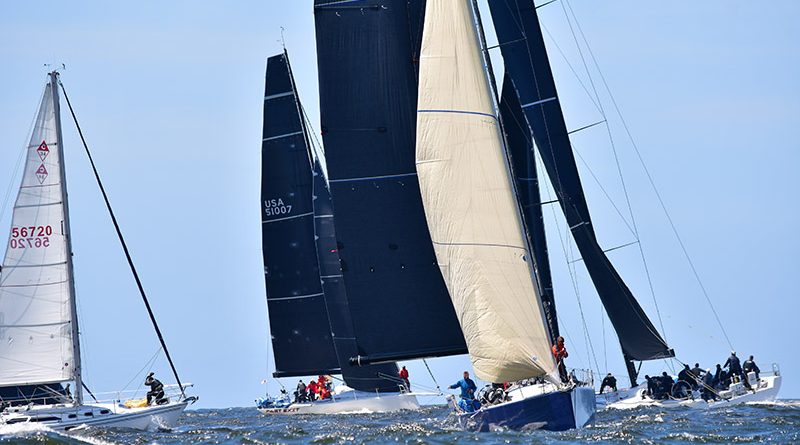 The PHRF RACE A competitors approach the start of N2E74 with Mike Sudo's Macondo, a Beneteau 47.7F (DRYC) to the right, Frederic Hayem's Mister J, a J/46 (NSBYC) in the center, and Jim Puckett's Amazing Grace a custom Farr 57 on the left. Amante (sail 77077) is in the background. Credit: Laurie Morrison for NOSA

ENSENADA, Mexico— April 22 kicked off the 75th Newport to Ensenada Race. Weather reports for the April 22 start accurately predicted windy and wavy conditions. Many racers on all three courses took on Mother Nature in an epic showdown; most reported personal best times, numerous records, and came ashore with tales of blustery sailing adventures.

Rio100, a custom Bakewell White, and its crew, led by owner Manouch Moshayedi, set a new N2E elapsed time record for a monohull at 7:02:17. In addition, six out of seven boats in the Maxi Class clocked in faster than the previous record set in 2016. George Hershman and Mark Coming’s Good Energy, a Reichel Pugh 63, sistership to former record-holder Aszhous, arrived second at 8.32.49, shaving 1:02:45 off the old record.

Despite missing the record by four minutes, Saga’s finish time of 9:39.01 earned the TP52 a trip to the podium to claim PHRF UL-Maxi class honors. With a corrected time of 12:31:13, owner John Brynjolffson earned the Amigo Trophy for the fasted corrected time for a first-time N2E skipper.

Bill Gibbs Wahoo, whose arrival at 9:23:19 was slightly ahead of Fast Exit (9:29:00) and Zephyrus (9:29:59), set multiple personal bests aboard his Schionning GF 1400 Catamaran. Not only did NOSA’s Staff Commodore sweep the top three trophies, but he did so for the fifth time.

In 2004, 2010, and 2013 Gibbs and a crew of friends collected the coveted Tommy Bahama Trophy for Best Corrected Overall with Afterburner, a 1987 52-foot Tennant Bladerunner-designed catamaran. He returned to the podium in 2016 after Wahoo’s inaugural N2E on the Schionning, which he modestly refers to as a lightweight cruising boat.

“My boat lights up at 20 knots of wind,” said Gibbs in an N2E press release from April 25. “This was the best wind of my 21 N2E races, by far. But you have to do all the races in order to be there for the special ones like this.”

Despite blowing out a spinnaker off San Diego, the crew bested Wahoo’s previous record by 90 minutes. In addition, it was reported that Wahoo got to sail in optimal conditions for much of the race, under 25 knots, TWS sailing downwind.

“Thanks to my great crew without whom this would not have been possible,” said Gibbs.

Gibbs will have his name etched 31 times onto five N2E trophies.

“We were 30 miles south of the Coronado Islands before dark!” said Fleming. “That’s unheard of; incredible.”

Although this was Nereid’s first N2E, having purchased it in only 2019, Nerid took home the City of Newport Beach Trophy for best UL-B class at the start of N2E 2022.

This win was notable because Fleming took home the President of USA Trophy for Best Corrected – All PHRF, but it was crewmember John Shampain’s fourth trip to the podium to claim top honors.

Nereid also took home the City of Newport Beach for best UL-B class and was part of the Cortez Racing Association that ended Dana Point Yacht Club’s decade-plus-long reign as the yacht club with the most entries.

PHRF A Class winner, David Chase of Uhambo, said they raised a code zero sail at the start and took off. The 17-time N2E sailor said their race was the fastest ever by far. It was also the first time Uhambo, named for a South African term meaning journey, saw the Coronado Islands in daylight.

In the CRUZ classes, NOSA Director David Normandin sailed home on April 24 with a crew of highly successful sailing friends and all four trophies. Flying a SDYC burgee, the sweep was yet another by Freedom, a Beneteau 55OC. It included the Almon Lockaby Trophy for CRUZ SPIN A, the Secretary of Foreign Relations-Mexico Trophy for Best Elapsed – Cruz, and the Beneteau Trophy for – Best Corrected Beneteau.

Andy Horning’s Day Tripper II placed third in PHRF-C, ending his multiple-year streak this year thanks to a couple of breakages in what he called a wild and woolly race. Befittingly, he was one of the three boats that claimed the Storm Trysail Team Trophy. Horning recalled being passed on the course by Rio100, calling the experience “otherworldly and amazing.”