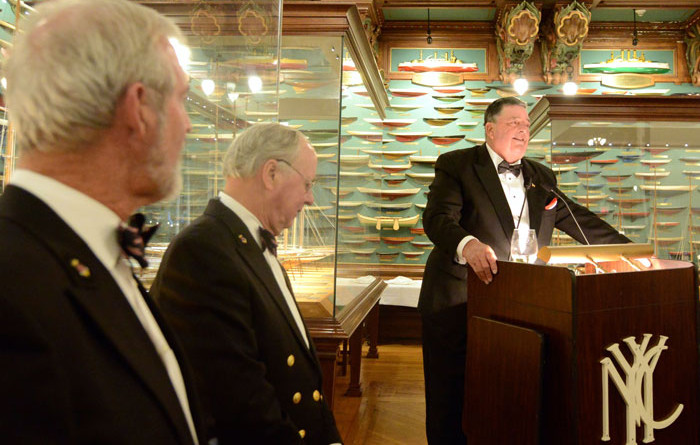 The New York Yacht Club said in a release the medal was first awarded in 1964 to the members of the Constellation America’s Cup syndicate as an expression of the club’s appreciation. Since 1985, flag officers have periodically awarded the medal in recognition of achievements of particular merit or outstanding contributions to the club or yachting in general.

“Dennis Conner has had more impact on sailing than any sailor in the world over the past four decades,” New York YC Commodore A. Rives Potts Jr. said in the release.

“It was huge night for me,” said Conner. “Being awarded the New York Yacht Club medal is special; it’s one of the most coveted honors in yachting.”

Conner’s exemplary record as a yachtsman spans all facets of the sport. He won a bronze medal in the Tempest class at the 1976 Olympic games in Montreal, has numerous world championships to his credit and sailed in two Whitbread Races.

The America’s Cup, however, was one constant in his career.

Conner’s 30-year-plus association with sailing’s flagship event wasn’t without its challenges. His relationship with the New York YC suffered after he lost the Cup in 1983 to John Bertrand and Australia II — ending the club’s historic 132-year winning streak — and challenged for the 1987 Cup representing the San Diego Yacht Club.

The 1988 defense was marred by a protracted legal battle that continued long after the famously lopsided match between Conner’s wing-sailed catamaran Stars & Stripes and Sir Michael Fay’s monstrous monohull from New Zealand. Nonetheless his standing among the greatest sailors ever to compete for the Auld Mug is without question.

He was inducted into the America’s Cup Hall of Fame with its inaugural class in 1993. Conner is also a member of the first group of inductees to the National Sailing Hall of Fame.