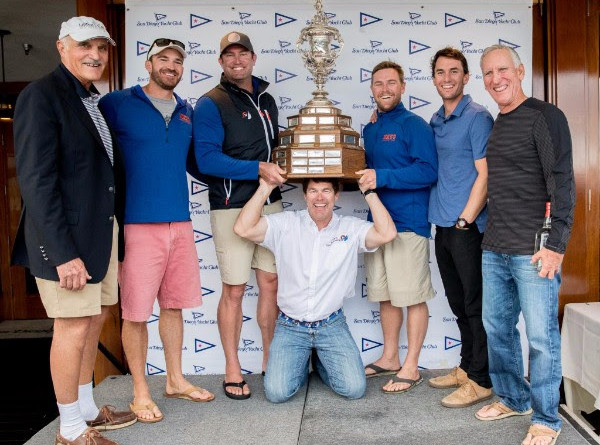 Coronado Yacht Club (CorYC) and NHYC competed in the first race with NHYC taking the lead. In regards to winning the first race, Jon Pinckney said his approach was to “stay in the pressure and stay out of the other guys’ bad air.”

“We just tried to get a clean start with clean air and we’ll try to do that for the next 11 races,” he continued.

Pinckney actually competed in the previous weekend’s SDYC’s Masters Regatta in the San Diego Bay as crew for Bill Menninger, the winner of the Masters Regatta. Jon compared the two fall sailing competitions stating, “This weekend is more intense than last weekend. There’s more pressure. We keep coming to this event every year, and we were third two years ago and second last year. Last weekend was great, but the pressure is on for this weekend. It was good to get a win in the first race and get some of that pressure off.”

NHYC ended up winning the first two races and despite finishing ninth in the third race, they were able to win the regatta overall by one point.

Pinckney said, “We fought really hard and we had a really good team. I think one of keys was whenever we were down in the race; we were able to come back. There were two races we didn’t, but there were also a lot of other races when we did. The first two races today we started well, but the last race we had to battle once again. When you’re battling you have to rely on your whole team and everyone was really good.”

Full results of the 2016 Lipton Cup are available online at sdyc.org/liptoncup/results.