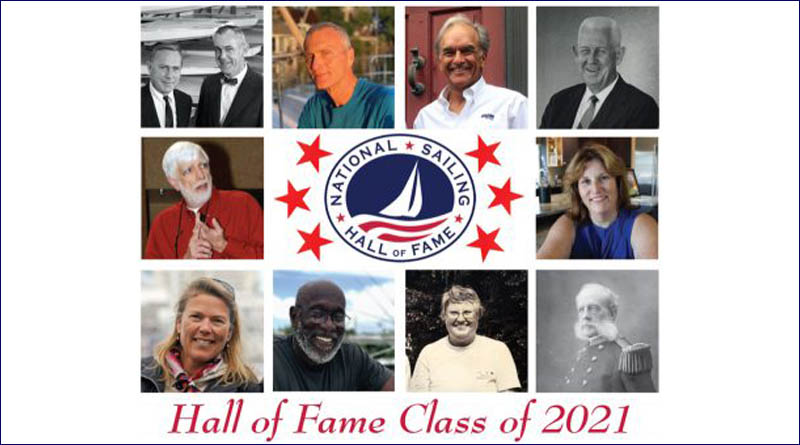 The 2021 class of inductees will join 90 others who hold the honor of being in the hall.

NEWPORT, R.I. 一 A new group of sailors have been announced as inductees into the National Sailing Hall of Fame, which honors sailors who have made a significant impact on the growth and development of the sport in the United States. The inductees were nominated by sailors from across the U.S. and reviewed by a selection committee comprised of representatives from the NSHOF Board, previous inductees, sailing media, sailing industry, a maritime museum, cruising community, and US Sailing.

“The remarkable achievements of this year’s class exemplify excellence and an unwavering dedication to our sport,” said Gus Carlson, president of the NSHOF in a July 5 press release. “We are proud to honor the accomplishments of these extraordinary people and confident they will inspire future generations of sailors, innovators, and contributors.”

The Class of 2021 will be formally celebrated on Oct. 16 with an Induction Ceremony in Newport, Rhode Island. The event will be held in the newly renovated Armory Building, the former site of the international press corps during the 12 Metre America’s Cup era in Newport and the future home of The Sailing Museum. The traditional Induction Ceremony will also honor members of the Class of 2020 who were honored in a virtual ceremony in 2020.

All Hall of Famers will be featured in the Legends of Sailing exhibition at The Sailing Museum, which is scheduled to open in May of 2022.

Nominations are accepted year-round at nshof.org/nominations. The deadline for 2022 nominees is January 31.

Nominees must be American citizens, 55 years of age or older, and have made a sustained and significant impact on the growth and development of the sport in the United States at a national or international level on the water as a sailboat racer, cruiser, or offshore sailor; on the technical aspects of sailing; or made other significant contributions as teachers, coaches, administrators, media, artists, musicians, promoters, or organizers.