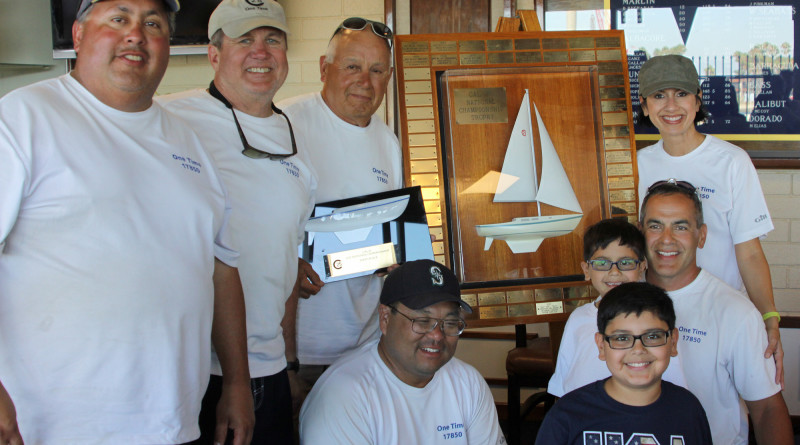 Redefining the word ‘dominate’, they scored six first place finishes out of a seven race regatta, only slightly stumbling in Race 4 with a second place finish on Aug. 15.

Throughout the regatta, whether the Melendres boat, One Time, was first off of the starting line, or buried in the eight-boat pack fighting to get to the front, it became very apparent early-on that they were going to be the boat to beat.

“The results may have indicated something else,” said Art Melendres. “But each race was a dogfight.”

“In a word, we’ve got a great team,” said Art. “Our crew work was excellent. They didn’t blow any tack, any douses… every single move was an excellent execution.

“My son [Scott] is phenomenal. James [bow] absolutely eats the spinnaker in every douse. My daughter is the downwind driver and catches every swell,” he added. “The bottom line is that I’ve got the easiest job on the boat!”

“I think what helped us out was a little bit of local knowledge,” said Anderson. “When the wind went left or right we were ready for it.

“But One Time really was the boat to beat,” he added.

“We had a variety of wind this weekend,” said Basadre. “It was typical Long Beach wind on the first day, but the second day was lighter conditions. Certain teams do better in lighter winds, but it didn’t really work out for us.”

Complete results are available at lbyc.org.http://www.lbyc.org/