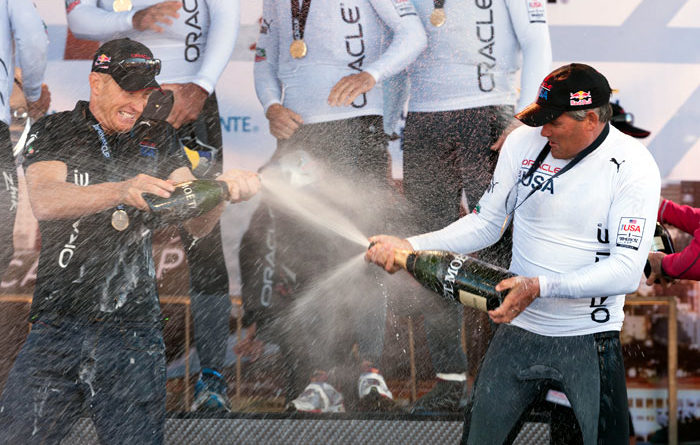 Russell Coutts, a four-time America’s Cup champion, beat fellow Oracle Racing skipper Jimmy Spithill in a thrilling finish to win the match racing championship Aug. 26 on San Francisco Bay, before Spithill came back to finish second in the fleet racing finale and take a one-point victory in the overall standings.

“This is a fantastic result for Oracle, to win the match racing, fleet racing and overall championship,” said Spithill, the reigning ACWS champion. “I can’t emphasize how much the boys fought around the race track. We battled our way back to the top in each event and were rewarded for it.”

The first America’s Cup World Series event in San Francisco, host city for the 2013 America’s Cup, was hailed as a success by Mayor Edwin M. Lee, who presented the prizes to the top three crews in the match racing and fleet racing championships.

Another ACWS regatta will be held on San Francisco Bay from Oct. 2-7.

The day began with Coutts taking out teammate Spithill in the match racing championship. In a race that saw the lead change hands three times, Coutts eked out a one-second victory, with both boats screaming across the finish line overlapped in 20-plus knots of wind.

It was Coutts’ second straight match racing title, coming after he won in Newport, R.I. in July, in the final regatta of the 2011-12 season. He has developed a fine touch for starting the fast 45-foot catamarans, which he displayed again Sunday.

“It’s been a fantastic event for our team,” said Coutts, CEO of Oracle Racing, which is owned by software tycoon Larry Ellison. “To get both teams in the match racing final is a great result, and Jimmy and the boys continue to be superb. It looked like the fans were having fun on the shore, and that’s what it’s all about. We were certainly having fun on the water.”

About 40 minutes after his close loss to Coutts, Spithill found himself in another charge to the finish line. This time he needed to overcome Team Korea skipper Nathan Outteridge, a 2012 Olympic Gold medalist, to capture the fleet racing and event championship.

Spithill rounded the last mark slightly overlapped on Outteridge’s stern, and then got a penalty on his rival skipper. Outteridge was forced to slow down by the umpires, and Spithill sailed through to leeward and into second place for the race and a one-point victory in the overall event standings.