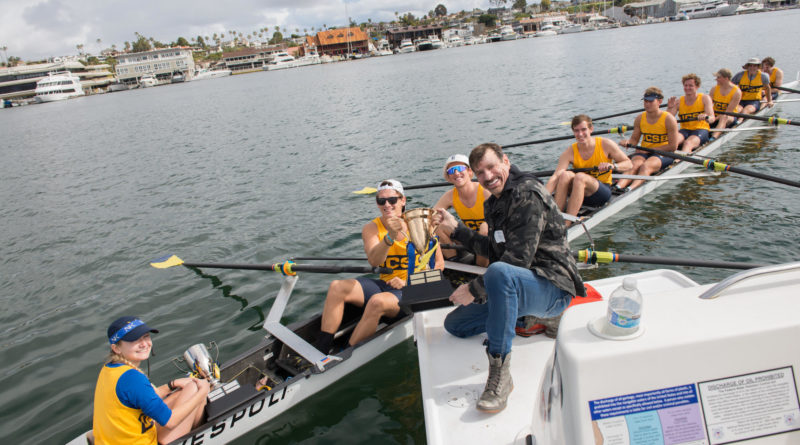 UC Irvine will use donation to travel to regatta in Georgia.

NEWPORT BEACH — The UC Irvine men’s and women’s crew teams will head to a championship regatta in Georgia later this spring, thanks to a generous donation made by Dr. Henry T. Nicholas III after the UC Challenge Cup Regatta in Newport Beach, March 3.

Nicholas granted the crew team about $40,000 after a post-regatta fundraiser fell short of raising enough money for the collegiate rowers cover costs associated with the competition in Georgia.

The fundraiser held after the March 3 UC Challenge Cup Regatta raised about $4,000 through a luncheon and silent auction. UCI’s crew team, however, needed to raise $45,000 to send their boats and competitors to the American Collegiate Rowing Association National Championship Regatta, which is held in May 26-27 in Gainesville, Georgia.

“Crew is a sport that gets very little glory, but requires tremendous commitment, heart and character,” Nicholas said after the lunch ceremony. “I like to support unsung heroes who succeed through hard work, discipline and teamwork, and we saw all of those qualities at today’s Regatta. I am extremely proud of all of the superb scholar-athletes who competed and gave it their all, and I am especially proud of the UCI crew teams. They deserve to go to Nationals and compete with the best.”

The Broadcom co-founder and longtime supporter of UCI crew donated more than $1 million to the program so far. The Challenge Cup Regatta is also backed by Nicholas and features crew teams from the various University of California campuses competing against each other.

“Crew is the first and oldest ongoing competitive sport at UCI,” a statement issued by Nicholas read. “Founding Chancellor Dan Aldrich started the program, which is now in its 52nd year. UCI Men’s Crew Coach Austin Brooks, whose salary is paid by the Friends of UCI Rowing, has built the UCI club program from a dozen students a few years ago to more than 50 now.”