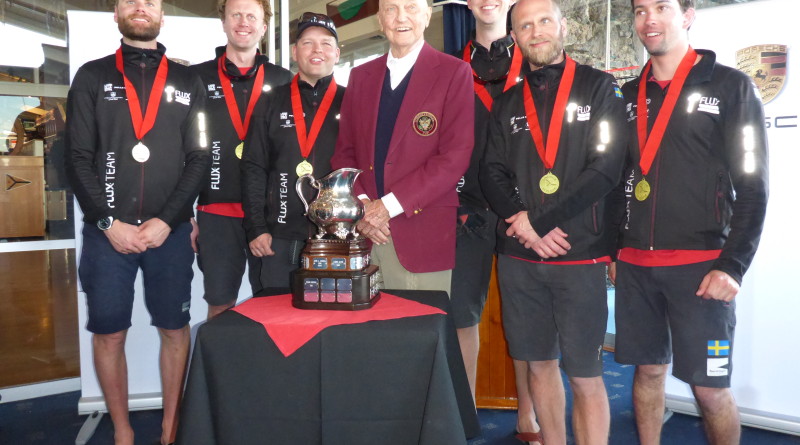 LONG BEACH — Spectators and racers agreed this year’s Ficker Cup was some of the most thrilling, and unpredictable racing, in the 16-year-history of the Grade Two regatta.

In the end, Johnie Berntsson slid by Scott Dickson in a final, tenuous match to win the Ficker Cup Presented by Porsche trophy. The weather and competition on April 3 was brisk from the get-go. As winner of the round robins, Berntsson had elected to race Matthew Jerwood: at 23, already ranked sixth in the world.

But David Storrs was wielding a secret weapon: Taylor Canfield and his USOne Sailing Team (who went on to win the Congressional Cup) were crewing for Pequot Yacht Club skipper; so Berntsson left Storrs to square off against Dickson. Almost immediately Storrs lured Dickson into a foul. Dickson quickly followed suit, evening the score.
In the semi-finals Berntsson’ prowess on the helm dispatched Jerwood 3-1; but Dickson and Storrs would go a full five matches before Dickson triumphed at last.

VENTURA — Several sailors participated in Smuggler’s Bash April 16-17, which is part of the Opening Day events for the Ventura Sailing Club.

Participants met in Smuggler’s Anchorage at Santa Cruz Island on April 16 and raced back on April 17 to Channel Islands Harbor. The beginning of the race included a man overboard recovery before the run back to the harbor. This year racers sailed back in a steady but light south wind. The most challenging part of the race was working through an area of light to no wind only a mile or two from the harbor entrance as the wind was slowly turning from south to northwest during the end of the race.