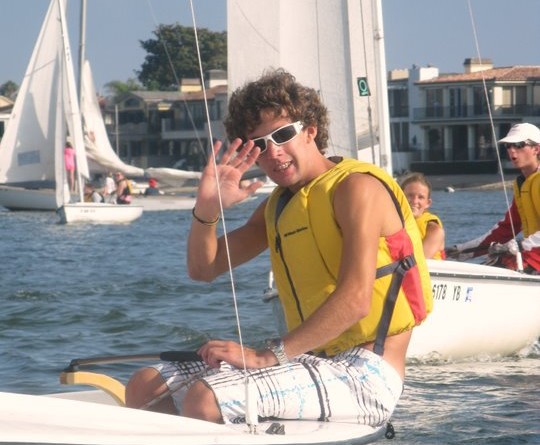 LOS ANGELES — The race was one of the best attended with 21 boats competing across four classes. The day was overcast with variable winds and some large swells outside the harbor with made for a slow rounding of the Point Fermin buoy.

More than 110 people spent time at the club for the evening chowder bar and awards ceremony.

DANA POINT — More than 30 sailors – both kids and adults – sailed in The Jeffrey Adam Memorial Regatta held during the 12th annual Festival of Whales on March 12.

Participants ages 8 to adult seniors, including Jeffrey’s dad, enjoyed a day of light and manageable winds. Rolling swells caused boats to completely disappear from the sight of spectator boats which was a little unnerving for some parents.

A highlight in the day was when a 45-foot gray whale surfaced in the middle of the fleet.

Jeffrey Adam was a Sea Scout who used his training at Dana Point Harbor’s Youth and Group facility to save the life of a fisherman who was swept away by a rogue wave off the south jetty. He was also national competitor in organized youth sailboat racing.

A dinner complete with an awards ceremony and silent auction raised more than $5,000 for the Dana Point Harbor Youth Foundation (DPHYF), whose mission is to help build the next generation of South Orange County sailors. Visit DPHYF.org for more information.

SAN DIEGO — All boats that participated in the 2016 Islands Race sailed through the finish line on March 12 minus two who retired early in the competition due to gear failure.

The March 11 start featured sunny skies and a southerly wind at just 4 knots. Lighter winds followed the initial squall, and then built steadily as the backside of the front filled in. Smaller sea states with 6-8 foot swells and significant wind chop marked the hours following the start. Winds varied between 20 and 30 knots with gusts. According to crew member Stuart Bannatyne from the Division 1 winning boat, Pyewacket, “It rained hard. It was a point-to-point race, yet the way the wind was shifting made it really challenging. But it was that kind of challenge that made it an enjoyable race.”

Mighty Merloe, the 60-foot ocean trimaran which was the first boat to finish and won the Division 1 class, had their share of struggles as well. Crewmember Paul Allen said, “What stood out to me the most was passing by the Oil Islands while we were going really fast – about 34 knots in a swell. I was concerned about the big steel mooring cans for the rig service boats so I was on the lookout for those. To avoid one, we couldn’t run down because of the rig, and we couldn’t steer up or we would have flipped!”

There were plenty of other race gear casualties though. According to crewmember Sean Grealish whose father, Scott Grealish, was skippering BlueFlash a J/88 who placed second in Division 4, “We shredded two sails because of a bad broach. We were sailing at 18 knots which is double what the J/88 is supposed to do. It would have been nice to be on a larger boat.”

Others weren’t as daunted by the squalls. Jeff Brown onboard the J/65 Maitri enjoyed the rough weather and had a different idea on how to best cope with bumpy conditions and damaged gear. “This was our first time on the new boat and we were having an absolute blast. We were eating lasagna and salad from Old Venice right when our first kite blew up. So then we started going 10 knots with our main alone all while still enjoying our lasagna.”

For some, the weather and conditions served as a great learning opportunity. There was a collection of younger crew members from the Newport Sea Base onboard the IMX-38, Apprentice, who have competed in the Islands Race prior, but never before in such challenging
conditions.