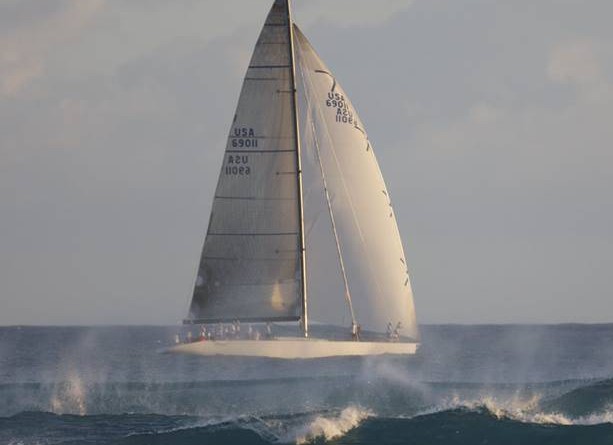 LOS ANGELES — The race for first to finish at Los Angeles Yacht Club’s Midwinter Around Catalina Island, held Feb. 4 and 5, was the usual shoot out between Medicine Man and Zephyrus.

Zephyrus made her time on Medicine Man at Catalina’s West End, with both boats tacking up the island from Arrow Point in typical Transpac start fashion.

However the fluky conditions on the backside of the island resulted in Medicine Man catching and passing Zephyrus in the storied wind shadow of the island’s East End.

From that position, Medicine Man ghosted toward Dana Point in 1.3 knots of breeze.  Zephyrus was able to point toward Angel’s Gate and slowly inched away, making her 35-minute 15-second handicap for the race’s final 23 miles, finishing ahead of Medicine Man by 55 seconds on corrected time and an elapsed time of 9 hours, 29 minutes and 52 seconds.

Zephyrus’ crew was awarded the Mayor Norris Poulson Trophy, which was won by Medicine Man’s skillful crew in 2016.

The Mayor Norris Poulson Perpetual Trophy for the Mid-Winter Catalina Island race was first presented to the Los Angeles YC on Feb.  25, 1955 by then Mayor of Los Angeles, Norris Poulson to encourage ocean racing for sailing yachts in Southern California.

Past winners of the trophy include Jim Kilroy, Dennis Conner, Dennis Choate and others.

Other yacht clubs will be holding Midwinter races on the weekends of Feb. 10 and 17.