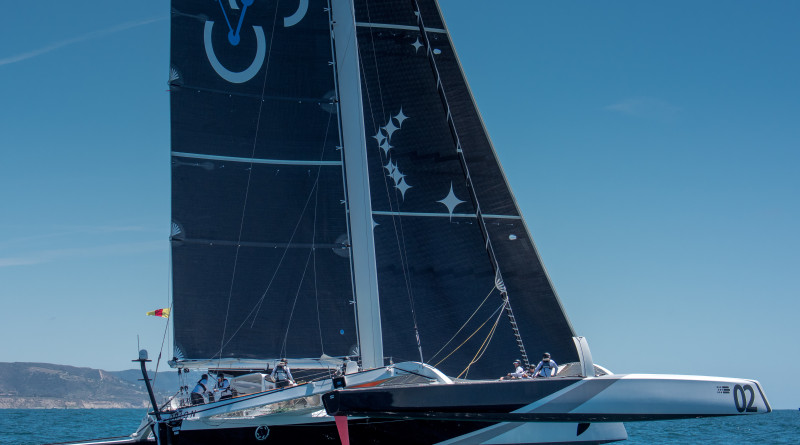 Orion, a MOD70, crushed the Newport to Ensenada’s longstanding record of 6:46:40. Orion crossed the finish line with a time of 5:17:26. Tom Walker photo

ENSENADA, Mexico — The 69th Newport to Ensenada International Yacht Race was more of a stampede than a sailboat race, with records being trampled and lots of firsts. Two super trimarans broke an 18-year old multihull record, and four Maxi’s broke the monohull record.

Orion, the MOD70 based in the San Francisco Bay area and owned by Tom Siebel broke the fastest elapsed time record in the Newport to Ensenada International Yacht Race. Orion crossed the finish line with a time of 5:17:26, which demolishes the old record of 6:46:40, set by the late Steve Fossett on the yacht Stars and Stripes in 1998 by more than 1 hour and 29 minutes.

Aszhou, a 63-foot Australian-built Reichel Pugh on its first Newport to Ensenada International Yacht Race with Steve Meheen, set a new monohull record of 9:35:34. Like Orion in the multihull class, Aszhou destroyed the previous record by just over 1 hour and 28 minutes. With a PHRF rating of -143 however, the time was not enough to win its class. That honor went to Medicine Man, which was one of four boats in the Maxi class (including Pyewacket and Zephyrus) to best the old record.

Ben Mitchell, who sailed on Pyewacket with Roy Pat Disney, drove back to collect the teams’ second place mug. The first Pyewacket set an Newport to Ensenada record 10-12 years ago, he said. Magnitude 80 broke their record by seven minutes.

Multiple-time Newport to Ensenada winner Bill Gibbs collected three trophies for Best Corrected, All Boats; Best Corrected, Orca and Best Corrected, Catamaran on April 24, adding to his collection of at least seven that he’s won since 2002. However, for the first time it was not for winning aboard the 53-foot catamaran Afterburner. This time, Gibbs sailed Wahoo, an almost 47-foot Schionning GF 1400.

Nobody can remember the last time all boats were accounted for by 3 p.m. Saturday.

“We learned that there is life here Saturday afternoons,” said Dick McNish, who collected two trophies. The nearly 89-year-old recalled the year they sailed across the finish line at 10:45 a.m., Sunday – 15 minutes before cut off time. This year, the namesake of the McNish Classic Yacht Race and crew arrived aboard Cheerio II, a 1931 wooden yawl, before 8 a.m., April 23. Of the 17 or 18 times he’s sailed the race, this was the first time winning his class too. Crewmember Scott Harrison Jr. joked that at 50, he was the youngest aboard, but finally old enough to sail on the McNish team and alongside his 81-year-old father, Scott Sr.  The other crewmembers were 60, 58, 54, and 88 years-old, not including McNish.

“It is kind of fun that we still get to do this at our age,” McNish said. “This is really something none of us will ever forget.” They’ll be back next year, when he’ll be a month from turning 90.

Pole Dancer skipper Terri Manok, will take the Caroline Starr trophy back to Oceanside Yacht Club. Many of her all women crew dedicated the race to veteran sailor Sue Senescu, who died unexpectedly last year.

“I learned a lot from her,” said Monok who called her crew, “my dream team, the best I could have ever hoped for.”