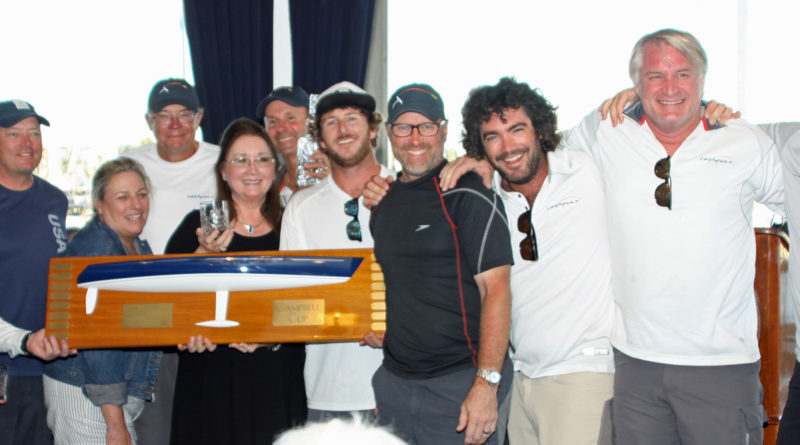 LONG BEACH — Joel Ronning and his Santa Cruz 70, Catapult, team won the 2017 Campbell Cup, Oct. 21-22, in the West Coast 70 class along with Bill Durant taking first place in the Farr 40 class in this regatta sponsored by North Sails and hosted by Long Beach Yacht Club.

Principal Race Officer John Busch and his team kept looking at the weather forecasts prior to the weekend’s racing with some doubt that there would be much breeze to run more than maybe one day of the scheduled two-day regatta. But fortunately, the forecasters were wrong.

The breeze filled in quite nicely a little after the scheduled start times of 12 noon each day, hitting sustained breeze of 17-18 knots on the first day.

Ronning needed to catch a flight immediately after Sunday’s races, but teammate Joseph Pohl agreed to help with the post-regatta interview.

“I’ve been sailing with Joel since the ‘80s,” Pohl said. “When he bought the Santa Cruz 70 he asked if I wanted to sail with him. We missed Tampa, but made all of the other races. It’s really great to get back racing with him and thanks to the Long Beach Yacht Club for a great event.”

Earlier this year, Ronning’s SC70, took first overall and first in class in the 2017 California Race Week and second in class in Division 2 in the Transpac race.

Roy Disney’s Andrews 70, Pyewacket, a four-time winner of this regatta, was hoping to add his name once again to the perpetual trophy. But a collision with Ed McDowell’s Santa Cruz 70, Grand Illusion, at the weather mark on the first race, Oct. 21, ended with Pyewacket retiring for that race and the rest of the weekend.

The Long Beach YC is a yacht-racing club, and Vice Commodore Bill Durant reaffirmed that this weekend by winning by three points over Mick Shlens’, Blade II, in the very competitive Farr 40 class.

The regatta, named after legendary sailor and big-boat supporter/owner, Mike Campbell, was organized by him in 2006 as the 70s Invitational. Campbell wanted to sponsor a regatta with the purpose of bringing together big boats for a fall event.

When he passed away in October of 2008 it was decided in 2009 the regatta would be renamed as an appropriate tribute for the regatta Campbell started.

Victoria Campbell, wife of Mike Campbell, was on hand at Long Beach YC, Oct. 22, to present trophies to the top finishers in each class.

Long Beach YC thanks Victoria for her continued support of the regatta her husband inspired.