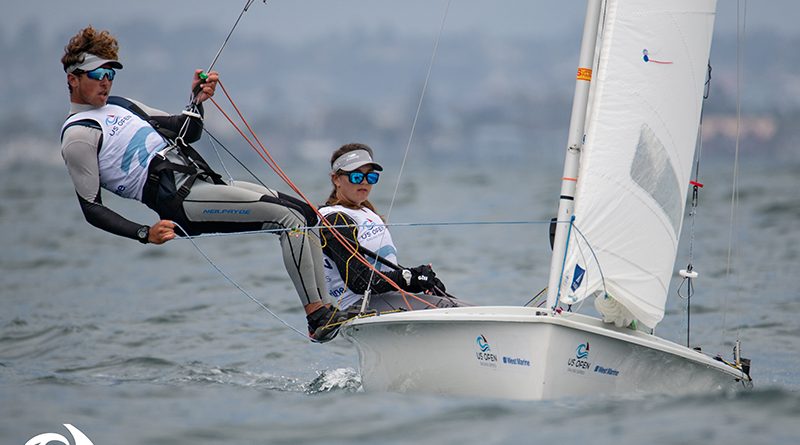 US Sailing and other host yacht clubs helping to organize at venues in Florida and California, the six-stage West Marine US Open Sailing Series is seeking to fulfill the demand for a racing and training platform based in the United States to provide a path to the Olympic Games for prospective athletes. US Sailing Team/ Lexi Pline

SAN DIEGO— On June 19, The San Diego edition of the West Marine US Open Sailing Series concluded after three days of beautiful racing in the Pacific, with wind at 8-10 knots and a 3–5-foot sea swell across the weekend. Title Sponsor West Marine and National Sponsors Gill Marine and Gowrie Group are committed to efforts that grow the series as a domestic training platform looking towards the Olympics.

The first stop on the West Coast swing, the San Diego event, included the ILCA 4, ILCA 6, ILCA7, 470, 29er, Snipe, and Finn classes. In addition, the event hosted the 29er National Championship and the U.S. Singlehanded Championship for the O’Day and Hanley Trophies.

“It was awesome to see the tight racing across all the fleets,” said Circle B PRO Becky Ashburn in a June 21 press release from U.S. Sailing. “As Race Committee, we were excited to see both seasoned veterans and the future of Olympic classes out on the racecourse this weekend.”

Fresh off a development camp in Long Beach, sailors from the Olympic Development Program (ODP) fought for domination in the ILCA 7 fleet. It was close for ODP Sailor Leo Boucher and teammate Nick Sessions, but Boucher ultimately bested his teammate, taking first by four points. Benjamin Smith, also on the ODP, placed third. The top three men in the ILCA 7 were eligible to compete for the George D. O’Day Trophy during the event, the U.S. Singlehanded Championship trophy open to men 17 years and older in the calendar year of the event. U.S. Singlehanded Results.

French sailor Gilda Dondona took the win in the ILCA 4 class, winning every race except one, which ultimately was dropped. Max Brameld placed second, and Landon Stahl took third.

A group from the High-Performance Center at St. Francis Yacht Club in San Francisco comprised the 470 fleet at this event. Kyra Phelan and Dylan Murphy dominated the group and won every race. Their teammates Brooke Schmelz & Josh Goldberg placed second, and Samantha Hemans and Alec Von Kerckhove placed third.

The Snipe class joined the regatta this year, a new edition, as they prepare for their National Championship at San Diego Yacht Club in July. Mary Baker and Diana Waterbury took first place over Rick Arneson and Gus Wirth. The youth team of Peter Busch and Cam Spriggs took third place.

This year, sailors from any country competing in Olympic classes in the Olympic configuration were eligible for prize money over three California events, a first in US Sailing history. Athletes were awarded $1,000 for first place, $500 for second, and $250 for third.