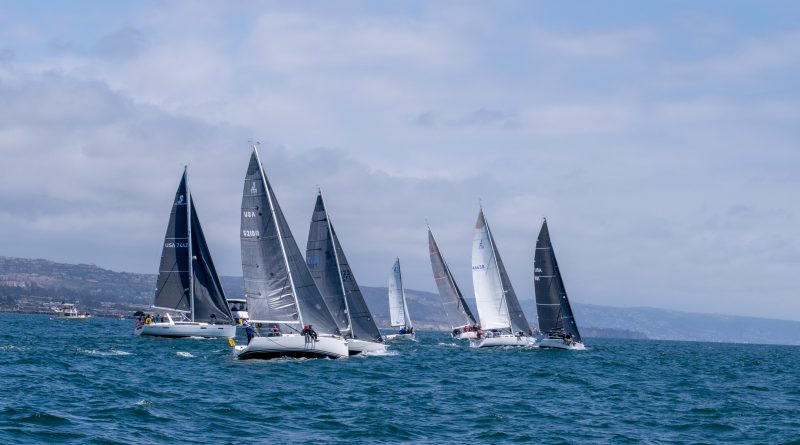 Hosted by the Newport Ocean Sailing Association, the time-honored race drew roughly 170 boats this year. The race took a hiatus last year due to the COVID-19 pandemic, but organizers and racers were eager to get back on the water and race this year.

“Even though people had to jump through hoops, both the race committee and the racers, it’s worth it,” said Dana Point Yacht Club member Betsy Senescu, who raced to Ensenada aboard Yippee Kai Yay, about all the extra efforts to provide COVID-19 protocols to keep racers safe.

This year’s big winner was Jerry Fiat’s Farrier 32 SRX, Taniwha, a folding trimaran, with an elapsed time of 11:21:00 and a corrected time of 14:23:27. Taniwha took home five trophies including best ORCA A and President of NOSA Best Corrected – Orca.

“It was pretty amazing to sail with Pete Melvin, Ferdinand Van West, and Tim McKegney,” said Fiat in a released statement. “I’m so fortunate to have sailed with such an impressive team of accomplished sailors.”

The team was hot on the tail of Roy Disney’s Volvo 70 Pyewacket, which made her N2E debut this year. Pyewacket and her crew smashed the elapsed time record in Newport Harbor Yacht Club’s Newport to Cabo San Lucas Race the month prior.

The technologically advanced boat came within 12 minutes and 13 seconds of breaking the N2E monohull record on a course without record-breaking conditions. With an elapsed time of 09:47:21 and corrected time of 16:08:39, Pyewacket claimed three top trophies.

Andy Rose and the It’s OK team returned to the podium to collect the Governor of California trophy for best-corrected Ultra-Light aboard the Andrews 50. Steve Sellinger’s Triumph, a Santa Cruz 52, was another big winner taking home the President Of USA Best Corrected and Jack Bailee Best Corrected – Newport Beach Club trophy. Andy Horning, a N2E veteran of 24 years competing in two different boats, has now been a class winner 15 times. Day Tripper II, a 1990 Hunter 40, and Horning’s regular crew made the best time in PHRF C Class by a wide margin and took home the Converse Wurdemann Trophy. Dan Rossen might as well have his name permanently etched onto the Volvo Best Corrected – Double Handed trophy, winning for yet another year with Problem Child, a B32, with partner Richard Whitely.