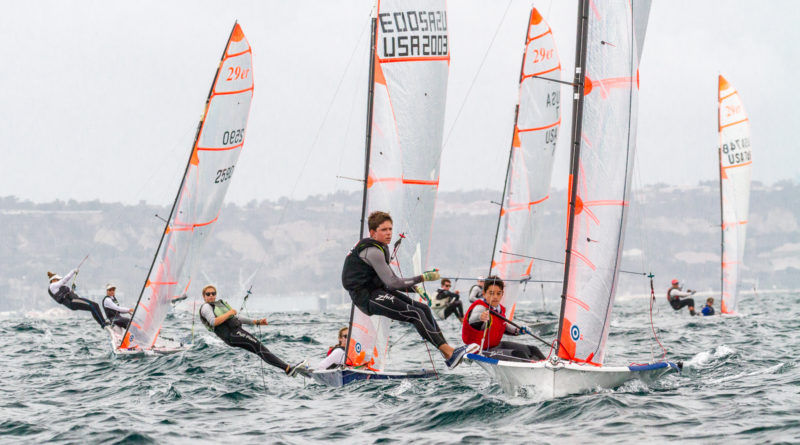 The regatta will provide a venue for sailors to train and compete in international, high-performance classes.

Nine fleets have been invited to San Diego for the second annual San Diego Olympic Classes Regatta (SDOCR), Sept. 7-8. The invited fleets are 29er, 49er, Finn, I420, Laser, Laser Radial, Nacra 15, Star and Snipe. The regatta will include two courses in Coronado Roads, allowing for national level management and competition.

San Diego Yacht Club, with the 2028 Los Angeles Olympic Summer Games in sight, introduced the event last year to provide a venue for sailors to train and compete in international, high-performance classes.

Brothers Ian Nyenhuis, 12, and Noah Nyenhuis, 14, were among the winners from the 2018 event. Noah told SDYC the event is getting him closer to his goal of making it to the Olympics, by bringing together sailors in Southern California to race at some of the highest levels.

“My goal for the future is to go to the 2028 Los Angeles Olympics with my brother, Ian,” Noah told SDYC.

The weekend prior to the regatta, SDYC is hosting a clinic from Friday, Aug. 23, to Sunday, Aug. 25, to help youth sailors prepare for the event. The clinic will feature coaches who previously competed in Olympic Games, including JJ Fetter, who won a bronze medal in the 1992 Women’s 470 and a silver medal in 2000 and Giselle Camet Nyenhuis who competed in the 1992 games. Nevin Snow and Dane Wilson will also be coaching; they are currently campaigning in the 49er fleet for 2020 Tokyo Olympics.

Races will begin at 12 p.m. on both Saturday and Sunday. The awards ceremony, featuring the Lowell North perpetual trophy, will be held at the SDYC Pavilion on Sept. 8 following the close of the protest deadline. North, who was a two-time Olympic medalist and SDYC member until his passing in June 2019, donated the perpetual trophy last year.

More information on the race, as well as registration, can be found at sdyc.org/sdocr. Event questions can be directed to Jeff Johnson at 619-758-6310 or sailing@sdyc.org.