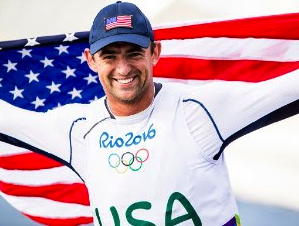 Paine will be honored on March 2 during a luncheon at the New York Yacht Club in Manhattan, where he will be presented with a specially-engraved Rolex timepiece.

In December, U.S. Sailing announced eight men and six women as sailing’s top performers for the award. These nominees, determined by the membership of U.S. Sailing, was presented to a panel of accomplished sailing journalists who together discussed the merits of each nominee and individually voted to determine the ultimate winners.

At the Rio 2016 Olympic Games, Caleb Paine earned a bronze medal in the Finn class, the Men’s Heavyweight Dinghy.

“I had a tough event the entire time, but I kept hammering away and doing all I can to medal. Obviously if I hadn’t made some mistakes here and there I would have had a better medal, but a medal none the less is amazing and something I am super happy about.” Paine told The Log following his Olympic win. “The competition is quite high and to come away with some hardware is definitely special.”

Pain reflects on his experience at the 2016 Olympic Games in Rio.

“The Olympics are amazing on so many levels; it’s so complex just the fact that you have over 200 countries coming to compete peacefully in unity,” Paine said. “That is something you can feel at the opening ceremonies and then you have the event itself and being a part of Team USA which is really special.”

Paine, 25, grew up in Southern California and inherited his father’s love of sailing. Southwestern Yacht Club in San Diego is where Paine learned to sail at an early age and devoted himself to mastering the one-person Sabot. Deciding early on to pursue an Olympic dream, Paine passed on college in favor of a life at sea on the racing sailing path.

“It was definitely nerve-racking at the time and people questioned the decision I made, but I truly believed in my goal and I believed I could achieve it. To be honest, the opportunities I had because of that decision really paid off for me,” Paine stated.

Paine now has earned not only the title of Olympic medalist for sailing but also U.S. Sailing’s 2016 Rolex Yachtsman of the Year.

U.S. Sailing Association is the national governing body for sailing. Rolex, the leading brand of the Swiss watch industry, is actively involved in supporting sports such as sailing.