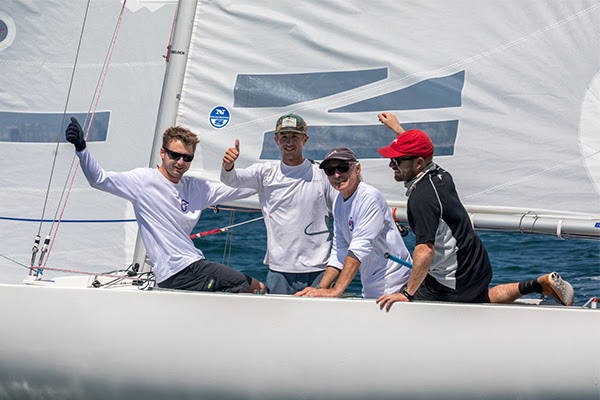 Scott Kaufman with his crew (Jesse Kirkland, Alex Curtis and Austen Anderson) won the championship overall even after placing second in the final race.

“I am honored to be among the other people who are on that list [of championships],” Kaufman said about his first time taking the title of Etchells North American Championship. “It’s amazing; a whole history of sailing has won this event. And we did it!”

Alex Camet and his crew (Ben Mitchell and Patrick Powell) were initially in the lead after the first day of races.

Kaufman and crew, aboard America Jane 1, took the lead the second day of the races.

Kaufman plans to go to San Francisco in September to compete in the 2017 Etchells World Championship next.

Keith Whittemore and crew (Peter Busch, Brian Thomas, and Kevin Downey) sailed to the top of the leader board with his Corinthian boat, Blonde Antelope.

The Corinthian division does not involve professional sailors.

“We are not professionals and [there are] a lot of professionals in this fleet,” Whittemore stated. “It is meaningful to us that we can compete with professional teams and that makes us proud of what we do.”

“SDYC and Etchells Fleet 13 are delighted to have had so many competitors from out of town join us for this regatta,” Sheid said.

SDYC held a reception and awards ceremony for the sailors after the final races on Aug. 19.

“SDYC showed off everything we have this week for the competitors. We designed the Malin Burnham Sailing Center with this exact regatta in mind – the Jessop Room for instance is large enough to measure an Etchells mainsail,” San Diego Yacht Club Commodore John Reiter boasted. “We served up champagne sailing conditions with 10-12 knots every day, just like in the brochure.

“Congratulations to Scott Kaufman and crew on their hard earned win. Besting this field was no easy task and they should hold their heads high,” Reiter commended.