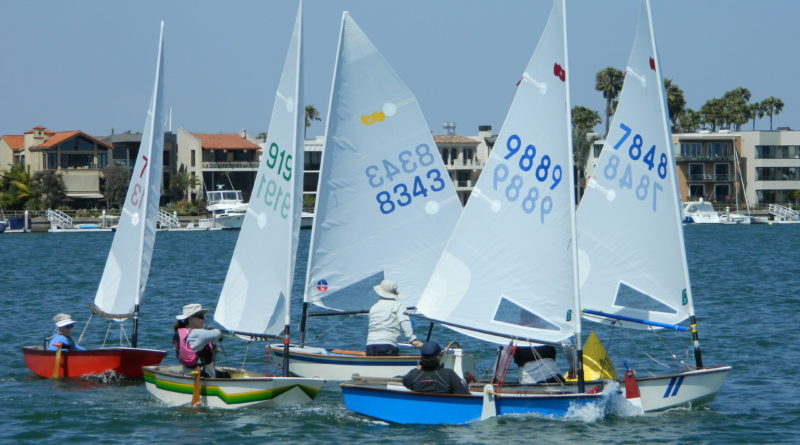 Alamitos Bay Yacht Club hosted the Senior Sabot Nationals, which kicked off with a cocktail party on Naples Islands, June 5. On the first day of racing, June 6, four competitors over 65 years of age entered with two of the racers over the age of 85. They completed three races, followed by refreshments at the dinghy dock, evening cocktails, an Italian style dinner and the trophy presentation.

In the Clydesdale Class for racers weighing more than 200 pounds, the winner was Matthew McDermaid’s father, Jeff McDermaid, also of Alamitos Bay YC.

The largest class, with 16 racers, was the Master Gold Fleet division for racers more than 40 years of age. Placing first was 1998 winner Robin Townsend of Alamitos Bay YC. Second place was Danny North of San Diego YC who was Junior Champion in 1975. In third, was Fred Stevens of Alamitos Bay YC.

On the second day of racing, nine competitors participated in five races in the Master Silver Fleet. Kathy Weishampel came in first for the host club; in second was Roberta Hunt of San Diego YC, with Dana Fischbeck from Newport Harbor Yacht Club in third.

Alamitos Bay YC Commodore Chuck Clay and INSA Commodore Mark Gaudio presented trophies to the winners of all of the classes.

The International Naples Sabot Association (INSA) sponsors these regattas every year with the host club rotating among five yacht clubs. This was the 31st edition of this championship regatta for adults who race the 8-foot Naples Sabot. The first competition for seniors (over 18) was held in 1972 and has been raced every year since then, rotating throughout Southern California yacht clubs.

Complete results are available at abyc.org.