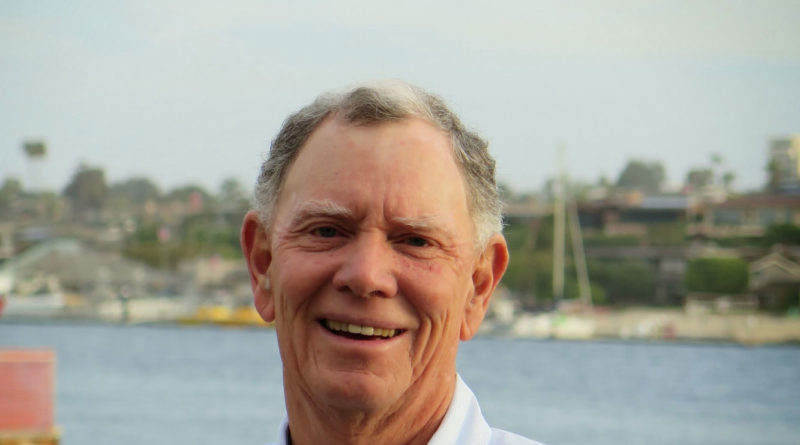 NEWPORT BEACH — The Newport Sea Base honored Tim Hogan for his leadership in high school sailing with the 2015 Good Sea Scout award during a special award ceremony, May 21.

Hogan, a real estate consultant and experienced sailor, was presented the honor during a special event that included a tour of the boat America. Newport Sea Base advisory board members, city leaders including Council member Marshall Duffield and leaders in the sailing community were present along with local high school sailing teams.

“Tim’s leadership and commitment to youth sailing since the late 1980s has been instrumental in the growth, development and strength of youth sailing in California where we have been a leader in the USA,” said Mike Segerblom, USC Sailing Coach and head of the Pacific Coast Interscholastic Sailing Association (PCISA).

For the past 10 years, Hogan has led the Interscholastic Sailing Association (ISSA), the national body for high school sailing. Prior to that, he ran the PCISA for 15 years, helping to grow the district to more than 90 schools.

In his role at ISSA, Hogan is the coordinator for seven districts around the country, serving more than 475 schools. He holds monthly conference calls, attends major championships and tends to individual district needs. He has worked with coaches and parents to set up the structure for successful programs.

Hogan, who sailed on sabots and snowbirds through the Newport Harbor Yacht Club program before going on to USC where he was a three-time All American, earning top honors as College Sailor of the Year in 1969, saw the opportunity for competitive high school sailors to move into top college sailing programs around the country. He went on to network with college coaches to build that transition from high school to college sailing.

In 1985, he took the helm of CISA, a nonprofit sailing foundation promoting youth sailing on all levels. The CISA clinic held every spring attracts the most elite youth sailors in the country who are given intense instruction with top collegiate coaches and former Olympians, according to the Newport Sea Base.

In 2002, Hogan’s efforts caught the attention of the late Roy Disney who issued a grant to CISA. That grant enabled Hogan to open up the world of sailing to at risk youth, send high school sailors to Europe and to the Orange Bowl.

According to Segerblom, there are currently 100 teams in California and 500 teams in the country. Local sailors have won collegiate championships, team racing and several top honors as College Sailor of the Year, moving on to Olympics.

In his sailing career, Hogan competed on the British Universities Sailing Association Tour and went on to campaign the Soling and Etchells. He skippered and won the Prince of Wales Bowl, the National Match Racing Championship and skippered the Sears Cup, multiple Lipton Cups and Congressional Cup.