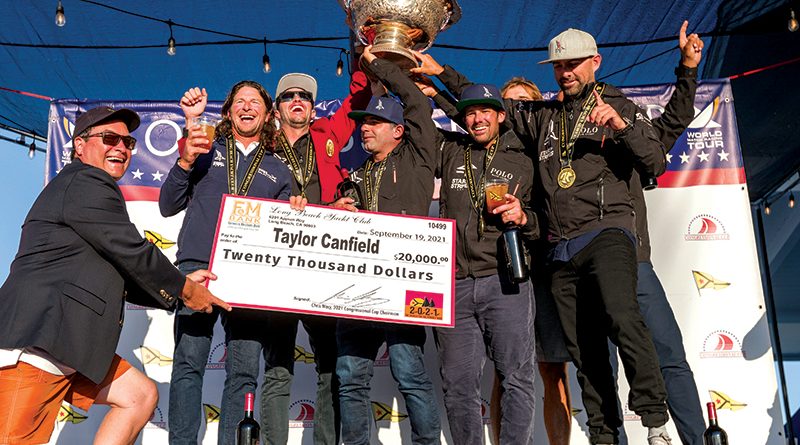 This win makes it Canfield’s fifth in his Congressional Cup career, and qualifies him for the World Match Racing Tour Finals in Shenzen China. Credit: Provided by Long Beach Yacht Club/Roman Photo

LONG BEACH一 Taylor Canfield’s USA Team, Stars+Stripes, have won the 56th Congressional Cup at Long Beach Yacht Club, making this Canfield’s fifth Congressional Cup victory. “It’s incredible, but it feels just like every other win,” said Canfield in a Sept. 19 press release. “Fantastic! And to win with the Stars+Stripes Team again: I’m on top of the world.” Mike Buckley, CEO of Stars+Stripes, was racing with Canfield, plus Mac Agnese, Leo Boucher, Victor Diaz De Leon, George Peet, and Erik Shampain. In the semi-final round, Canfield took on Eric Monnin, Capvis Swiss Match Race Team, who had advanced to the semi-finals for this first time in his eight years at the Congressional Cup. Monnin won his initial match against Canfield but was turned back in the next three matches, including one black-flagged match. Monnin then beat Chris Poole of the USA in the best-of-three series in the petite finals and captured his first podium win. Finally, Canfield was up against Johnie Berntsson of Berntsson Sailing Team Sweden in the finals. The lightest day of the series with patchy southerly breezes coming to about seven knots. Stars+Stripes swept the series with three wins in a row. Berntsson took home the second-place trophy for the fourth time in 15 years. “It was great to come and beat an incredible field of sailors, including some great up-and-coming young guys,” said Canfield. “But at 32, I think I’ve got a few more years left in me.” The top eight teams in the Congressional Cup will qualify for the World Match Racing Tour Finals in Shenzhen, China, Dec. 15-19. The event will have a $200,000 prize purse. The World Match Racing Tour was founded in 2000 and promotes match racing worldwide. When the tour was established, the Congressional Cup was in its 45th year and became one of the flagship events for the championship.  For complete results, visit the Congressional Cup website at https://www.matchracingresults.com/2021/congressional-cup//.