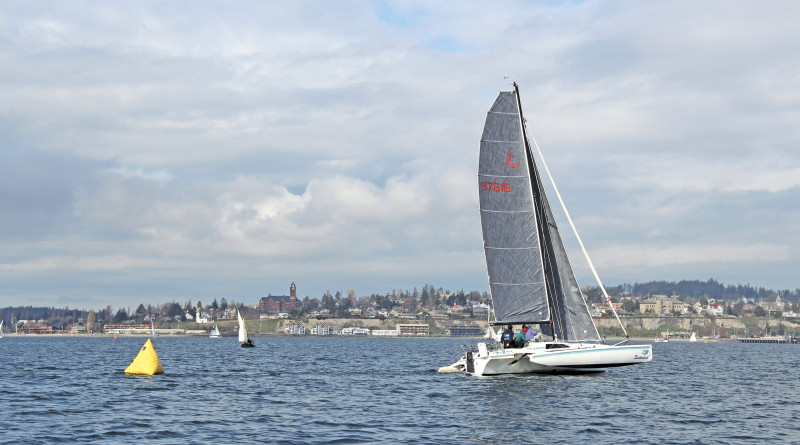 First all-women’s team to complete the R2AK race is planning to do it again in 2017.

VENTURA ― One of the most challenging sailing races in North America featured its first-ever all-women’s team last year. The crew known as Team Sistership plans to follow up its 2016 debut with three Ventura County women, all in their 50s, preparing to participate in the 2017 Race to Alaska (R2AK).

Michelle Boroski, 59, Johanna Gabbard, 57, and Stephanie York, 50, hope to use R2AK as a platform to empower women.

Boroski, a sailor and physician’s assistant who taught Outward Bound with the originators of the Race to Alaska, initially thought the idea of such a race was “crazy.” R2AK is one of the longest wind and human powered boat races.

The race offered Boroski a chance to challenge herself.

“This [R2AK] race rejuvenated me,” Boroski told The Log. “I decided to find like-minded women in their 50s to join me in the race.”

Boroski bought a Corsair 27 Trimaran in 2015. She spent 10 months working on the boat. The boat needed re-rigging, a new sail as well as replacing every piece of hardware. “It took a lot of time, money and effort,” Boroski said.

Repairs were still being made on the Trimaran during the very morning of the 2016 R2AK.

“We were almost late due to having to fix a solar panel controller and ended up replacing it right at the start,” Boroski said.

One reason Boroski wants to do the race again this year is because the boat is ready.

Having the knowledge and experience the crew has gained from participating in the race last year, they are ready to apply it to this year’s race.

Team Sistership is hoping to improve upon last year’s performance. So many factors of the race need to be taken into consideration, such as navigation, tide, currents and choice of direction. The vessel’s speed is dictated by all of these factors.

Not only is the boat ready this time, the team’s members believe they are better prepared and will make wiser choices on direction and tides.

Due to lack of wind during last year’s race, Team Sistership spent nearly 70 hours rowing a 3,000-pound vessel. Numerous times they were forced to anchor to wait out the tides.

“We can row at 3 knots, but if the tides were stronger than that, we just had to anchor. Otherwise we would just be rowing for nothing,” Boroski said. “The tides change every six hours.”

Exhausted from all the rowing, the team would oversleep at times resulting in a couple hours lost.

The 2017 R2AK race is scheduled earlier in the season this year, so the team is hopeful there will be more sailing with wind and less rowing due to lack of wind. The race begins June 8, about three weeks earlier than last year’s start.

The crew consisted of four women last year. However they are considering keeping the team to three females this year.

Not only did Team Sistership achieve being the first all-women team to finish the R2AK race, they also built a large community of followers.

“R2AK is an interesting race, but it also has a huge following because it is so unique. It is a great way to send a message and reach a lot of people with our message,” Gabbard said.

Team Sistership’s message: the more women see other women taking on physical challenges, the more inspired they would be to challenge themselves and be more active, regardless of age.

“As women in our 50s, we want to dismantle the age and gender stereotypes that we face,” Gabbard said. “As we are all primarily healthcare providers, we recognize that sometimes people’s concept of aging and what that means can be a barrier to people staying active.”

Team Sistership would like to do better in the upcoming R2AK as it would be the final run for this crew.

Boroski hopes to motivate another group of women to use the boat and do the race in 2018. In fact, their aspiration is to perpetuate this movement – “a movement to recognize and empower women to dream big and live boldly,” as stated on the team’s website.

More information on Team Sistership is on their website at sistership.org.