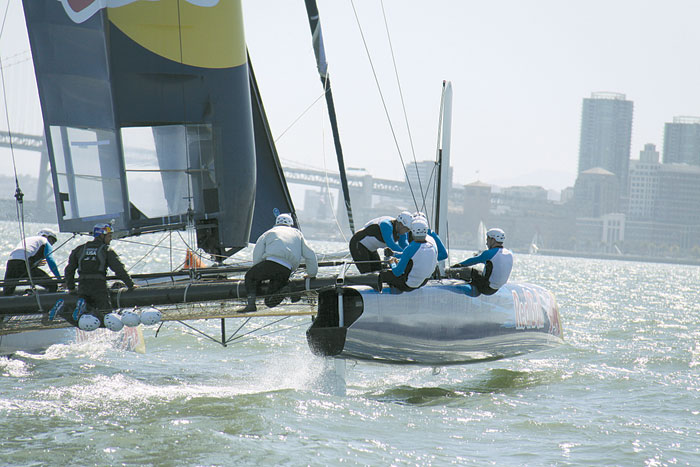 TIBURON — For serious sailors of any age, competing for the America’s Cup represents a career pinnacle — and it is a lofty dream that many will never achieve.

When it was announced that the 34th America’s Cup had established the inaugural Red Bull Youth America’s Cup series to help top young racers ages 19-24 get on the path to America’s Cup competition, young sailors throughout the country began vying for spots on one of the 10 participating teams.

“The America’s Cup is always a dream of any young sailor — and with this new pathway to the cup, it was hard to find a reason not to make a strong effort for an entry to the event,” said Jake LaDow of San Diego, wing trimmer for Team USA45 Racing.

The 20-year-old junior and fellow teammates Jake Reynolds and Nevin Snow are recognized names on the sailing circuit. They have high world rankings and numerous big wins under their belts — including Italiana Cup, GoPro Chicago Match Cup and Governor’s Cup.

“It is a once-in-a-lifetime opportunity to be at the pinnacle of youth sailing,” said Reynolds, bowman for the team, who is a sophomore at the College of Charleston.

The team was selected by Reynolds, 19, of San Diego; Snow; and LaDow. The three college students know each other from growing up in San Diego and from San Diego Yacht Club, and through junior sailing and collegiate sailing.

That was an important move, Reynolds explained. “San Francisco Bay is one of the most unique sailing venues in the world — and is where the actual races will be taking place,” he said.

Bay Area residents have welcomed team members into their homes for the duration of the summer. To show their appreciation for the town of Tiburon’s support, team members participate in community events.

“By having the entire team together in Tiburon, we can focus as a group in the gym and on the water,” LaDow said. “This allows us to, together, become stronger as sailors and athletes, and to learn the intricacies of San Francisco Bay.”

Each team had to compete for a spot in the race. They raced the same course as America’s Cup racers on San Francisco Bay, Then, they were evaluated based on race results at the selection series, their overall performance on and off the water, a fitness test, training programs and their professionalism.

Now, as a team, the sailors spend their days preparing for the tough international competition.

Racing aboard the AC45 boats takes much coordination between team members, Ogletree explained. “You are working on a moving trampoline,” which is hard to compare to other vessels, he said.

LaDow added, “The boat is extremely fast, fun and physical. There is a ton of coordination between team members that must be perfect in order to properly sail the boat around the course.”

Team members typically start their day with a 6:30 a.m. workout at the gym, before heading to the Extreme 40 at San Francisco Yacht Club. Then, they rig the boat, sail for three to five hours and later spend time off the water, maintaining or repairing the boat.

“The sailors are focused on achieving their highest level of fitness, as well as maximizing time on the water,” Ogletree said.             Reynolds added, “The team’s main objective is to maximize efficiency in training — to become the best sailors and team, come September.”

Aside from spending time on the water, a major portion of the team’s campaign involves raising funds to pay for their numerous expenses. The team has raised about 60 percent of the total budget so far, and team members are now working to raise the remaining 40 percent.

The AC45 catamaran and wing has been supplied to each team. However, each team is responsible for raising funds to pay for all the other aspects of their quest to win the Red Bull Youth America’s Cup.

Team USA45 Racing is one of two teams representing the U.S. The other one is American Youth Sailing Force, led by 23-year-old Ian Andrewes of San Francisco. Both teams are participating through a relationship with America’s Cup World Series defender Oracle Team USA.

“We have a very strong team dynamic, which we know will help us be prepared for Sept. 1,” Reynolds said.

For more information or to support the team, visit usa45racing.com.