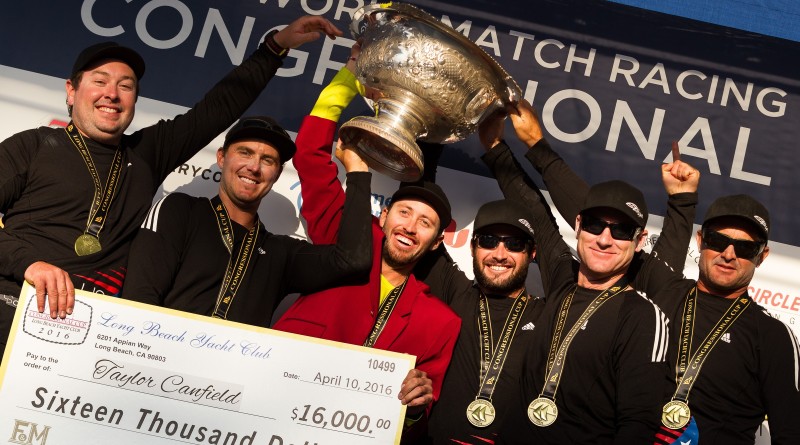 LONG BEACH — Taylor Canfield and his USOne Sailing Team triumphed in the Congressional Cup regatta, Stage Two of the World Match Racing Tour (WMRT), after five days of match racing — making him the first skipper to win three Crimson Blazers back-to-back, in the 52-year history of the legendary regatta.

The five-day WMRT championship event had been beleaguered with unseasonable weather. But the racers were unflappable, and ever favorable about their participation in the Congressional Cup; known as the ‘granddaddy of match racing’ and a gateway to the America’s Cup.

The steady breeze and sunshine arrived, just in time for the Semi Finals and Finals on April 10.

Canfield beat Semi Finalist Scott Dickson (USA) in three successive matches, racing so close to the pier that Dickson’s spinnaker grazed it; earning him a penalty he couldn’t shake. At the same time Sehested was dueling Sam Gilmour (AUS) in a Semi Final series that went a full five matches. Gilmour defeated Dickson, to take third place in the event.

In the first of the Finals, Canfield defeated Sehested with a 30-second lead; it looked like the two-time defending champion had the title sewn up.

But in the second match, Sehested retaliated, crossing the finish line three seconds ahead of Canfield. And as he rallied strong in the final sudden-death bout, it appeared that Canfield had met his match. Sehested led his rival by mere seconds around the course, and then Canfield hit the leeward gate, and was flagged.

Pressing up the course, Canfield said, “We had nothing to lose, so we parked it up at the top mark.” They luffed up Sehested. “The execution was spot on, and Nicolai made a small mistake,” Canfield said, a penalty that scrubbed Canfield’s. “At this level you make an error and your competition takes full advantage of it.”

Back in control, Canfield kept Sehested pinned. USOne Sailing Team shut the door on Sehested, took the match, and the Congressional Cup.

Canfield was pleased, he said, not only with this three-peat, but also for logging the seventh Congressional Cup win for St. Thomas Yacht Club. Member Peter Holmberg is a four-time Crimson Blazer winner, in 1998, 1998, 2001 and 2002.

Long Beach YC founded the Congressional Cup in 1965, pioneering the concept of on-the-water umpiring. Racing is held in a fleet of identical 37-foot Catalina keelboats, designed and maintained specifically for the event. The world’s top ranked skippers vie for the esteemed Congressional Cup each spring, and the Crimson Blazer — an honor bestowed to sailing icons like Dennis Conner, Dean Barker, Ken Read, Ted Turner, Taylor Canfield and more.