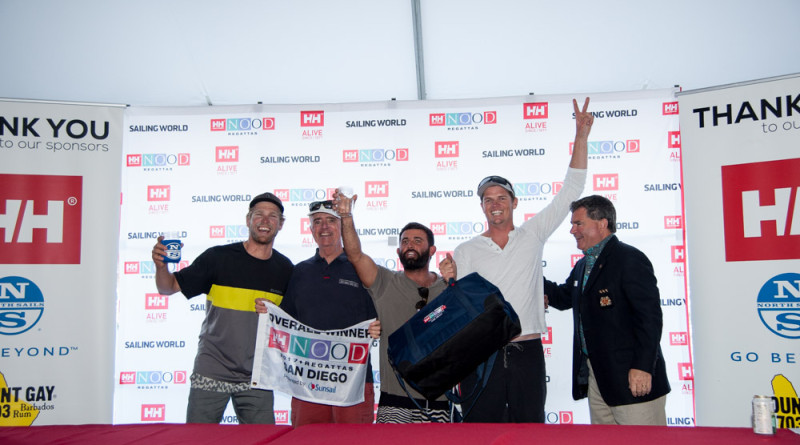 Beneteau First 36.7s; Pyle had three first-place and one second-place finishes on March 18.             When asked for his recipe for success, Pyle raved about his “secret weapon” – his son, Nick, who used to be the head sailing coach at San Diego Yacht Club – along with an optimized boat and in-sync crew.

“We do something that’s really unusual,” Pyle said. “On our way out to the racecourse, we talk through everybody’s position from prestart to upwind and windward rounding to downwind and leeward rounding, and even penalty turns. We discuss every single position in detail, so there’s no guessing.”

Leading the International 14 (I-14) fleet, one of four classes that began the regatta on Friday, is local skipper Brad Reutenik and crew aboard Astralugus. Despite what he described as “pretty funky” wind conditions, the team was able to shift gears well between light-air lulls and stronger gusts to win three of four races, but another obstacle stood in the way of these extremely fast, physical boats.

“We have to sail through some of the slower fleets,” Reutenik said. “It’s challenging to go through a wall of boats and we have to be confident in our boat handling, because these boats are very difficult to sail. They make really good sailors look really bad, but the fun factor is so high.”

Saturday also featured the North Sails Rally – two races designed to give local crews on boats of any size the opportunity to participate in a single, daylong race. First place prizes went to skipper Lawrence Adam and his team aboard the Corsair 31 F Bomb and Greg Stewart’s team on Sprig, a 6m.

Other notable day two results include a three-way tie in the ORC fleet, which is a handicapping system that allows one-design sport boats that don’t have fleets at the event to sail together. Drew Belk’s Precept2, a Melges 32, leads the group with 3-1-1-3 finishes on the day.

Comprehensive results are available at yachtscoring.com.

Visit sailingworld.com/nood-regattas for more information about the regatta.