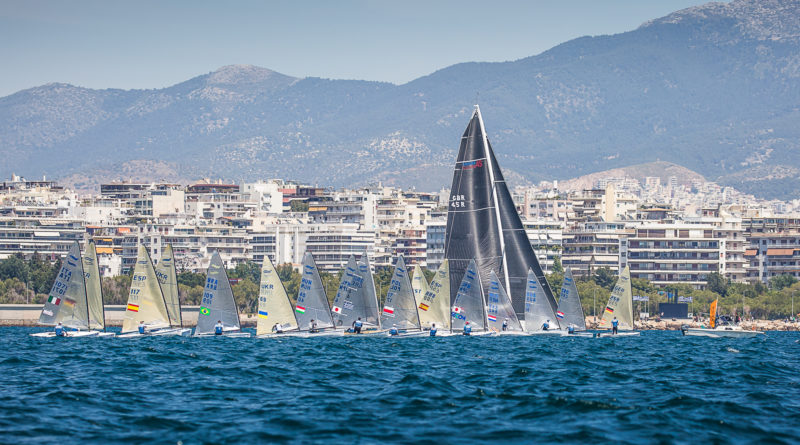 UPDATE: Caleb Paine placed 11th overall at the 2019 Finn European Championships, giving him and the United States a berth at the 2020 Games in Tokyo. Paine, who hails from San Diego, also competed in the 2016 Games in Rio de Janeiro.

ATHENS, Greece—Finn class sailors are angling to fill four berths to the 2020 Olympics in Tokyo at the 2019 Open European Championship in Athens, Greece, with results to determine who will compete in the Summer Games in Japan on May 18. The European championship event, which began on May 13, culminates in a medal race on May 18; those heading to the 2020 Tokyo Games will be announced during the May 18 closing ceremony.

San Diego’s Caleb Paine, who won the only sailing medal for the United States at the 2016 Summer Games in Rio de Janeiro, Brazil, is one of two sailors competing to represent the U.S. in Tokyo. Luke Muller of Fort Pierce, Florida is the other sailor; only one of the two sailors needs to earn a selection to the Tokyo Games to ensure the United States is represented at next year’s Olympiad.

Racing has been ongoing from May 13 to press time (and beyond) at the Athens International Sailing Centre, with 10 races taking place between Monday (May 13) and Friday (May 17). The 11th race is scheduled for May 18.

Sailing events at the 2020 Tokyo Games will be held at Enoshima Yacht Harbor between July 27 and Aug. 6; 10 events are on the docket, with 350 sailors expected to compete for medals.

Finn is the oldest of sailing classes still competing in the Olympics; the Finn class has been a part of 18 Olympiads since it was introduced at the 1952 Games in Helsinki, Finland. The United States won three sailing medals at the 1952 Helsinki Games, tied for most that year with Norway and Sweden. Britton Chance, Michael Schoettle, Edgar White and Sumner White won gold for the U.S. in the 5.5 Metre race. Claiming gold for the U.S in the 6 Metre race were Herman Whiton, Everard Endt, John Morgan, Eric Ridder, Julian Roosevelt and Emelyn Whiton.

John Price and John Reid earned a silver medal for the United States in the Star class at the 1952 Helsinki Games. Yachtsman Paul Elvstrøm (Denmark) was the gold medalist for the Finn class.

The Log will update this story online (thelog.com) after results are finalized.