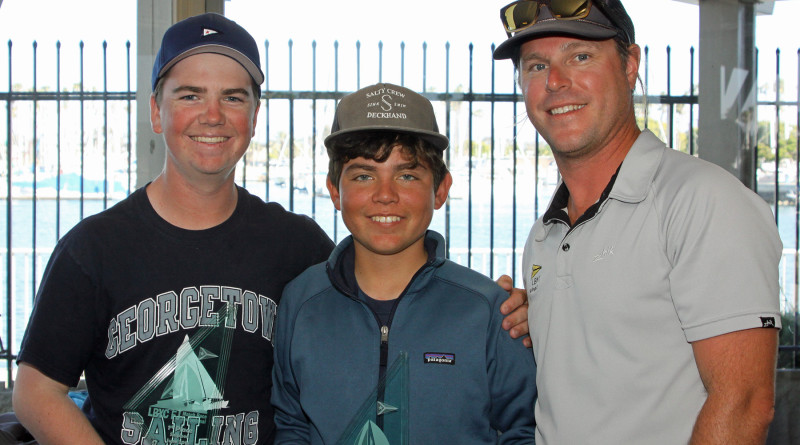 Eight Southern California skippers were invited to the race sponsored by Kaenon and sailed in Long Beach YC’s fleet of Collegiate FJs, with the requirement of a minimum age of 10 years and a maximum age of 18. One skipper withdrew at the last minute, leaving seven to race the single round-robin match racing format which took place inside Long Beach’s Alamitos Bay Marina.

While most of the western states are enduring a searing hot spell, Long Beach benefited from a morning overcast that kept the temperatures in the low 70s with breezes of 6-10 knots, even after the sun came out mid-afternoon.

“We definitely tried to go as fast as we could and tried to have better tactics,” said Reiter. “Our tactics changed from the beginning of the day. We knew which boats we had to beat and worked closely together when we tacked and when we rolled, knowing we had to get more comfortable.”

Jack Egan, who crewed with Reiter, is a good friend and skilled sailor in his own right who made the chemistry work for the team.

“This is my first time ever as crew with Jack,” said Egan. “We’ve know each other for a long time and I know what a skipper looks out for.”

The inspiration for the regatta came from Long Beach YC’s past Junior Commodore Jack Berg who raced in the inaugural regatta in 2013.

“My dad [Eric Berg] and I were looking at the America’s Cup AC45s on TV and I said, ‘it would be really cool to have a match race for juniors,’” Berg said. “The next day my dad was at the club’s board of directors meeting and mentioned my idea. Then it just kept growing.”