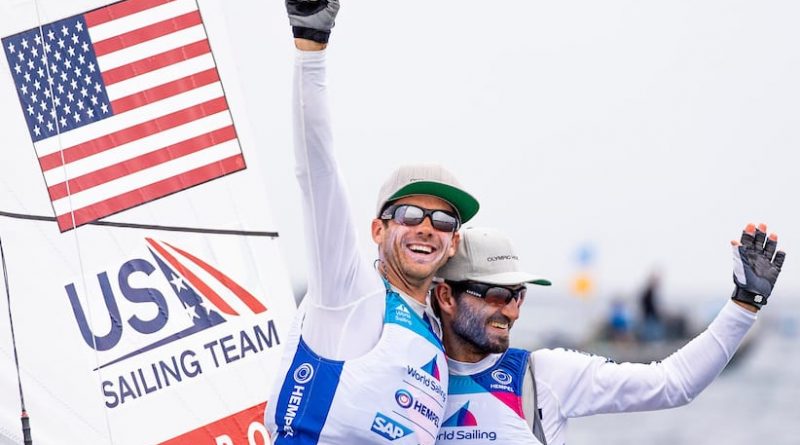 BRISTOL, Rhode Island—Sailors Stu McNay of Providence, Rhode Island and David Hughes of Miami, Florida were announced as the first two nominations of the 2020 Olympic Games. Both earned a selection to the Tokyo 2020 U.S. Olympic Sailing team. They were also nominated to Team USA.

US Sailing made the announcement on June 23, shortly after releasing revisions of its selection procedures. McNay and Hughes made the sailing team based upon the conclusion of the Men’s 470 Olympic Trials, which had two selection events.

Both sailors also competed at the 2016 Games in Rio.

“Being nominated to the U.S. Olympic Team is an honor that never gets old,” Hughes said. “Representing the USA is bigger than any one of us. It’s a duty and privilege that Stu and I don’t take lightly.”

Tokyo will be the fourth Games for McNay and second Games for Hughes, according to US Sailing.

“Together, the team finished fourth overall in Rio and has stood on the podium in several major international events,” US Sailing staff added in a released statement.

The US Sailing Team is returning to on-the-water training; the team had taken time of from training due to Covid-19.

Tokyo’s hosting of the Summer Games was also postponed due to the coronavirus pandemic, with the Olympiad now scheduled to take place in July 2021.

“The virus has clearly changed our world and continues to change us in ways we don’t yet realize. The Olympics is no exception, given the postponement of the Tokyo Games and everything that feeds into it,” Hughes said. “That said, we’ve also been handed an unexpected chance for reflection on what we do and why. It is up to us to meet the moment and retool our approach to Olympic success.”

Hughes and McNay are both in Marion, Massachusetts, according to US Sailing, where they are training and preparing for the Tokyo Games.

US Sailing Head Coach Luther Carpenter said Hughes and McNay bring a wealth of experience and knowledge to the sailing team.

“The combination of their racing successes, 470-specific knowledge, and avid desire to perform well over the entire week of the Olympic competition gives me confidence that they will be standing on the podium in Enoshima,” Carpenter said.

Sailing events will be held in Enoshima, a suburb of Tokyo.