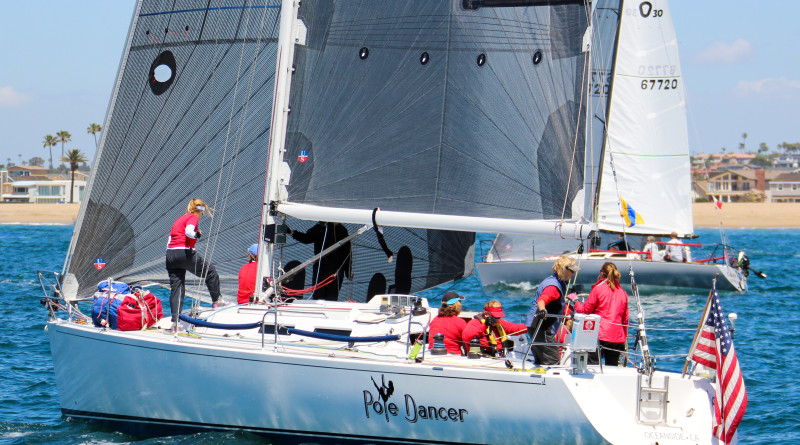 Pole Dancer, owned by Terri Manok, will once again participate in the annual Women 4 Women Regatta held outside Oceanside Harbor. The boat with its all gal crew recently sailed in the Newport to Ensenada race. Joysailing photo

Oceanside YC’s annual race gets women on the water.

OCEANSIDE — Men will not be at the helm of the more than 12 boats expected at the Oceanside Pier, May 14, which serves as the starting line for the Women 4 Women Regatta.
Guys are allowed, just not at the helm as the race looks to place women front and center in the regatta.

The seventh annual Women 4 Women’s regatta hosted by Oceanside Yacht Club celebrates female sailors and serves as a way to get women on the water while also raising money for the Women’s Resource Center – a nonprofit organization serving North County communities.

Originally founded as the Ladies Skippers Race, racers can sail in one of two classes: all female crew or a mixed gender crew with a female at the helm. The course is sailed near Oceanside Pier.

Prizes will be given to the skipper collecting the highest dollar amount in donations. For those not racing but still interested in contributing to the Women’s Resource Center, donations can be made. A raffle and silent auction will be held once races conclude.

All proceeds earned through race entry fees, raffles and the silent auction will benefit the center and help provide services to families affected by domestic violence and sexual assault.

For more information about the Women 4 Women Regatta, visit Oceansideyc.net. Early entry deadline is May 10.