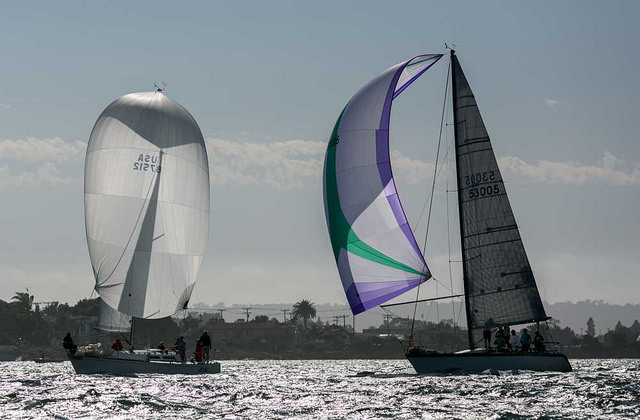 SAN DIEGO — There’s one word competitors won’t be using to describe the final day of racing at the 2015 Yachting Cup: boring. The race’s final race day, May 3, saw split head sails, shrimped kites and a sailor in the water.

Ultimately, Neil Fraser’s Mexican Divorce was selected as the overall winner for the 43rd annual Yachting Cup. With 11 different fleets and heavy competition throughout each, the Organizing Authority had quite a tedious task in selecting the overall Yachting Cup winner.

Fraser, who is based out of South Bay Yacht Racing Club in Marina del Rey, competed in the Division B class on Mexican Divorce, a 1D35. The Organizing Authority had two basic criteria to be met before any competitors were eligible for selection as the overall winner. First, the competitor needed to have sailed all three race days. Second, they needed to win their fleet.

The title was not an easy one for Fraser and his crew to take, as competition cranked into full gear for the final racing day. Conditions were much stronger than May 2’s day of racing, with white caps on the ocean courses and breezes ranging from 12 to 15 knots.

In Race 7 of the Far Roads venue, Bud shrimped a spinnaker kite while Blue Blazes and Velos both split head sails. Inside the bay, Creative broke a rudder, keeping them from finishing the last race of the day.

With fast sailing, sunny skies and plenty of action, this day was truly a testament the excitement of San Diego sailing.