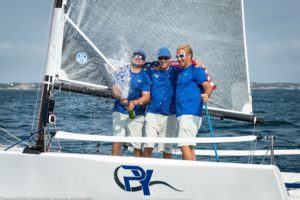 Freides, with approximately 40 years of sailing experience, said this was the highlight of his sailing career.

Freides’ mother, while in the hospital 3.5 years ago battling lung cancer, encouraged him to buy his own boat. Freides lost him mother to cancer saying this win was for her.

“I want to be able to say, ‘Look mom, I’m actually the best in the world at something,’” Freides told The Log.

Freides started sailing at the age of seven. His father was a sailor, but his brother did not enjoy it.

“My mom’s rule was if he couldn’t take one of us, he couldn’t do it,” Freides said. “I got stuck, and I happened to love it.”

Freides’ passion for sailing evolved into an occupation as a yacht designer at Nelson/Marek. He said he enjoyed the job but received advice which changed his career path and ultimately his sailing endeavors.

He was aboard a boat he helped design, a 50-footer named Idler, getting ready to race in the Admiral’s Cup. The vessel’s owner, George David, asked him if he desired sailing his own boat instead of sailing the boats of others. Freides responded he would love his own boat. David then advised Freides to pursue an MBA and a well-paid career.

Freides adhered to the advice, went back to school and began a career in finance in order to afford his own boat.

The time and money needed to compete in national and world sailing championships are possible factors limiting the number of sailors, Freides mentioned.

“At this level of racing, it’s very expensive. It hurts the level of competition, but I don’t know what the solution is,” Freides said. “The whole sport of sailing has changed in that there’s very much a professional element to it.

“I love sailing with pros, because they’re so good and because they make me better. Also, I love beating the best in the world,” Freides continued. “On the flip side, the numbers just continue to drop because of it, I think. I don’t know if it’s a time commitment or the dollars.”

Freides said he felt chills down his spine and was near tears when the whole fleet began cheering and clapping for him and his team, just as everyone realized he and his crew would win the Melges 20 World Championship.

“What other sport do your competitors cheer for you?” Freides asked hypothetically.

“It makes you feel good about winning the right way. It was just a great moment in my life,” Freides added.

He attributes the win to having a top team.

“I’ve got the best guys and the best coach. I knew I had all the ingredients. I was along for the ride,” Freides stated.

Freides and his team are representing California Yacht Club in the upcoming Lipton Cup competition and will continue on into the winter sailing series.

“My original plan was if I won [the world championship], I was going to sell the boat – not probably thinking I’d actually win,” Freides said. “Now it’s just too much fun. We are going to keep going.”