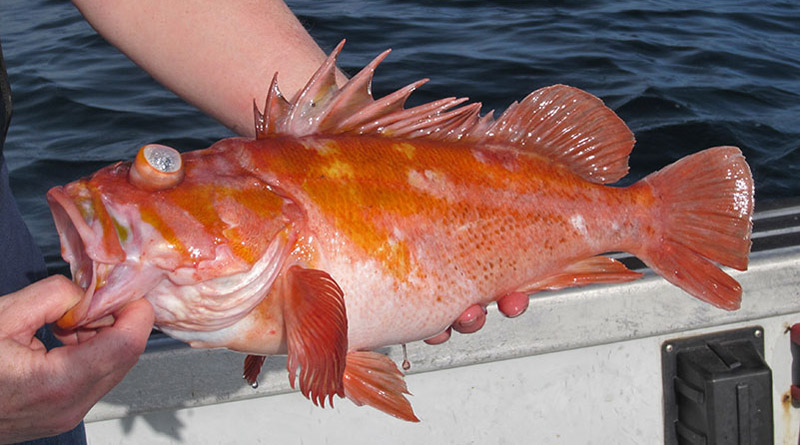 The daily bag limit for rockfish is a total of 10 fish whether it be rockfish, cabezon, or greenlings and the fish must be a minimum of 15 inches long. Image provided by CDFW

The regulations’ importance was considered and adopted by the California Fish and Game Commission in mid-December to align with federal regulations for these species.

Although the rockfish population remains very healthy and robust overall, some subpopulations were re-evaluated recently, and the data showed a decline in certain species.

Yaremko also noted the unsustainably high catches of vermilion rockfish that have occurred each year since 2015. For those reasons, new federal regulations were implemented to reduce sport bag limits for these three species in 2022.

“Groundfish, including species like copper and quillback rockfish, are managed through the Pacific Fishery Management Council (PFMC). The PFMC’s Scientific and Statistical Committee recently reviewed and approved the use of new stock assessments for Copper and Quillback rockfish,” said information provided by Perter Tira of CDFW on behalf on the CDFW’s marine biologists. “The pessimistic results from these stock assessments were the driver for reductions in the sub-bag limit for Copper and Quillback Rockfish. Unsustainably high catches of vermilion rockfish have occurred each year since 2015, and a review of catch data from 2021 showed the 5-fish bag limit was not reducing catches enough. The data and justification for the decision to reduce the sub-bag limit for these species can be found in a PFMC briefing book for November, Agenda Item E.7.a. CDFW Report 2.”

The changes to the sub-bag limits within the 10-fish daily Rockfish, Cabezon, Greenling (RCG) complex bag, and possession limit include:

Anglers are advised to release rockfish or any other species subject to barotrauma; the use of a descending device is encouraged to return the fish to the bottom. Please visit CDFW’s Rockfish Barotrauma page for more information.

To better assist anglers with identifying rockfish species while fishing, CDFW is creating new informational brochures to help identify copper and quillback rockfish from similar-looking species, such as gopher and canary rockfish. The flyers will be available soon on CDFW’s Fish and Shellfish Identification page and the Marine Region Groundfish page.

Anglers are encouraged to check CDFW’s website for the most up-to-date regulations before fishing for groundfish, including rockfish, lingcod, and other species defined in the California Code of Regulations; changes can occur in-season. Although the boat-based groundfish fishery is closed statewide as of Jan. 1, the fishery is open year-round for shore-based angling and spearfishing. The boat-based recreational groundfish fishery season dates and depth limits are expected to be the same as in 2021 and are as follows: