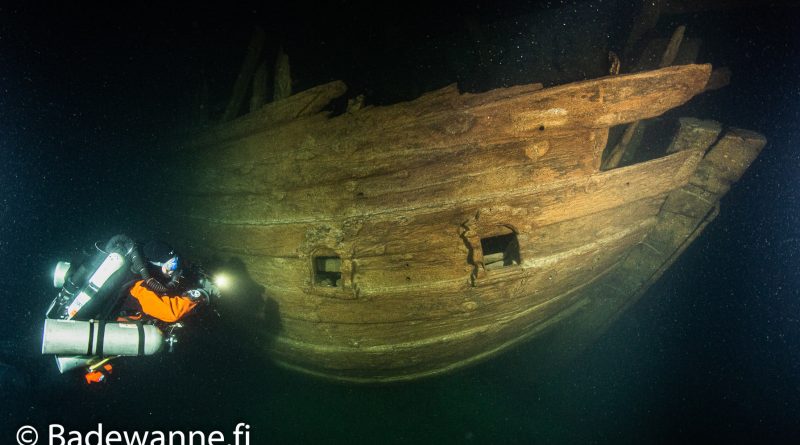 BALTIC SEA—A ship in near pristine condition estimated to be about 400 years old was recently discovered by divers in the Baltic Sea off the coast of Finland.

The ship dates back to the height of the Dutch trading empire when they were an economic superpower spanning five continents. By 1670, the Dutch Empire was responsible for half of Europe’s shipping.

The Dutch used “fluit” ships, such as the recently discovered one, to carry loads of cargo around the world. The fluit was a three-master ship designed with a large cargo capacity. The fluit ships utilized very novel and advanced rigging which allowed for a much smaller crew than earlier ship types. The fluit ships were dominant in the Baltic trade between the late 16th to mid-18th century, but according to Badewann, very few of these types of ships have survived, even ones that have been wrecked at the bottom of the sea, making the discovery even more unique.

Despite some minor damage from trawling fishing nets, the ship is largely still intact. Badewann said she rested on even keel on the seabed with most of her rigging scattered around her. The conditions around the Gulf of Finland are thought to have played a role in preserving the ship.

The Baltic Sea is one of the few places where wooden wrecks can survive the elements. Low salinity, absolute darkness, and very low temperatures all year round mean ships are less impacted by chemical, biochemical and biological decay, as well as organisms that usually eat wooden shipwrecks.

“This find, a practically intact and complete Dutch Fluit ship, the Queen of the Baltic trade from almost 400 years back, is a good example of the importance of the Baltic Sea, and especially the Gulf of Finland as a special cellar of the sea,” Badewann wrote in a post on their website about the wreck.

The diving team hasn’t yet been able to determine what caused the ship to end up on the bottom of the ocean floor.