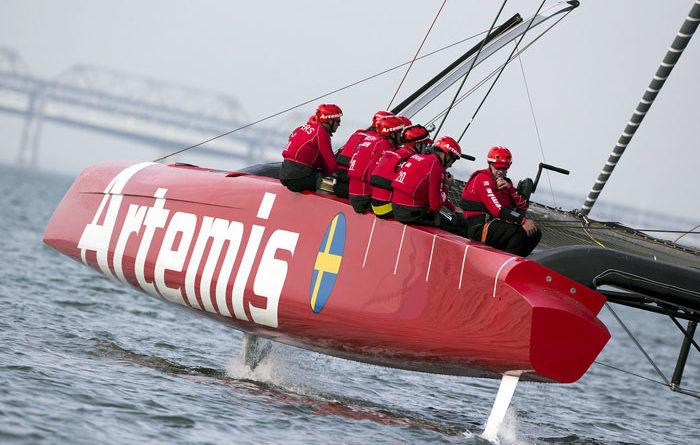 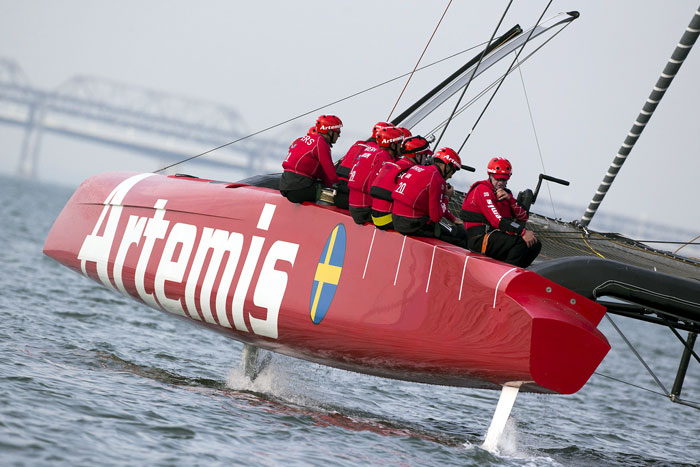 SAN FRANCISCO (AP) — Sailors know the risks and rewards that come with the new space-age America’s Cup boats that speed like race cars across the waves.

Still, the death of British Olympic champion Andrew “Bart” Simpson May 9 during a training session on San Francisco Bay gives fresh urgency to one question in the chase for the oldest trophy in international sports this summer.

How safe are the boats?

Authorities are hoping they’ll have a good answer once they complete an investigation into why the 72-foot catamaran sailed by Artemis Racing of Sweden nose-dived and capsized after completing a difficult maneuver. Simpson, 36, was submerged under the 7-ton boat for more than 10 minutes. Efforts to revive him were unsuccessful, and he was pronounced dead a short time later.
It wasn’t the first accident involving the high-performance catamarans, which were introduced as one of many changes to make the “stodgy old sport” of sailing more appealing to mainstream sports fans after Oracle Team USA, owned by software tycoon Larry Ellison, won the Cup in 2010 with a giant trimaran.

Since the new champions always get to rewrite the rules, Ellison and his world-class sailors tossed out the plodding sloops that previously had been sailed in the America’s Cup in favor of the fast catamarans.

Sailing on San Francisco Bay rather than miles out on the ocean, Oracle envisioned the 72-foot cats wowing both spectators lining the shore and TV viewers alike by skimming across the top of the waves.

The boats have everything to capture the attention of landlubbers — sleek, twin hulls; a 131-foot sail that looks and acts like a jetliner’s wing, improving speed and stability; and, in a recent development, carbon-fiber hydrofoils that lift the hulls out of the water and make them go even faster.

When the boats hook into a breeze, the ride is exhilarating. Make the slightest mistake or push the boat too hard, and it can all go wrong.

America’s Cup organizers said May 10 it was unclear what impact the fatality might have on the series of races scheduled to begin on July 6.

“Nothing is off the table,” said Stephen Barclay, chief executive of the America’s Cup Event Authority. “We need to know what happened.”

Another organizing official, Iain Murray, said conditions on the afternoon of May 9 were typical on San Francisco Bay, which often gets hard-blowing winds. Artemis was operating in winds of 15 to 20 knots, with occasionally stiffer gusts.

Barclay and Oracle Team USA officials each declined to comment on the safety of the boats. Artemis officials, who expect to launch a second boat next month, did not attend a news conference or return phone calls.

“It’s what these guys want to do,” Murray said. “They want to take sailing to the next level, and these boats are part of that platform.”

Murray said Artemis Racing’s catamaran was attempting to change direction and turn downwind when it capsized. Though difficult, the maneuver was normal, he said.

Murray said Simpson was on a trampoline on the windward side of the yacht with crewmembers and got trapped under some solid sections of the catamaran, out of sight to those on board who were looking for him.

Simpson was a strategist for the team that represents a Swedish yacht club. The crew was practicing with Oracle.

One hull snapped. Investigators will have to determine whether a structural problem caused the yacht to flip, or if the capsize broke the boat. Last fall, Artemis said the front beam of the catamaran was damaged during structural tests, delaying the boat’s christening.

Simpson is the second sailor to die in training during the 162-year history of the America’s Cup. The other was a Spanish sailor who was killed in 1999 when he was struck in the head by a piece of broken equipment.

No deaths have been recorded during the actual racing since its inception in 1851, when Queen Victoria watched the schooner America beat a fleet of British ships around the Isle of Wight.

“The harder you push the accelerator, the faster you go — but there’s a chance you hit the wall,” Spithill said in March during a visit to San Diego to promote the Red Bull Youth America’s Cup.

Spithill was at the helm of Oracle’s first 72-foot catamaran in October when the twin hulls dug into the waves and the boat tumbled stern over bow. There were no injuries, but the wing sail was destroyed, sidelining the crew for four months.

As part of a push to go faster, teams have worked to master hydrofoils.

“What’s so amazing about this boat is it’s suspended on these tiny pieces of engineered carbon fiber,” Spithill told the Associated Press last month after Oracle launched its new boat. “That’s why these boats are so cutting-edge technologically, and we’re pushing them right to the limit.”

Ellison originally envisioned a dozen challengers. But only three have made it this far. Some dropped out due to costs, others because they didn’t want to switch to multihull sailing.

Simpson was told by British entrepreneur Keith Mills that the boats being proposed by the organizers seemed too risky. Concerned about putting the sailors in danger, Mills scrapped his plans for a British challenge.

“Based on the specs that I saw in 2010, I was very concerned, and I expressed my concerns,” Mills said May 10. “But the Americans were determined to go ahead with this type of sailing, which I fundamentally disagreed with.”