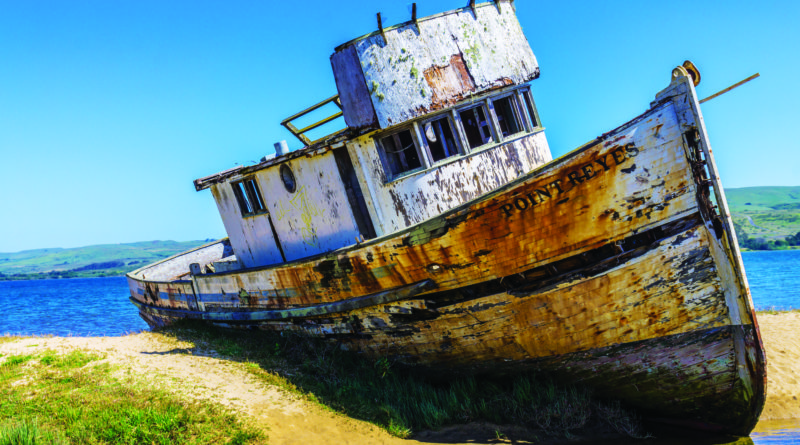 STATEWIDE—California is one of the largest boating destinations in the country, coming in fourth place. More than 772,000 people have registered recreational vessels, which sparks the question: What happens when a boat is no longer usable, either due to an accident or poor maintenance? Sometimes, instead of paying the fees or seeking legal courses of action to dispose a vessel, it ends up abandoned on one of California’s many waterways.

Things can happen on the water, leaving a boat totaled or sunk. However, the damages associated with owning a boat can lead to one deciding to leave a vessel behind.

According to California State Lands Commission’s website, “While responsible owners dispose of vessels lawfully, other owners abandon them on state waterways where they impeded navigation, interfere with boating traffic, and as they deteriorate, leach toxic chemicals and fuel into state waterways.”

There are several vessel removal plans in California. In a press release by California’s Department of Parks and Recreation, it was announced the state would fund up to $2.75 million to local public agencies to help remove abandoned vessels and keep waterways clean and safe. Funding will come from the Abandoned Watercraft Abatement Fund (AWAF) and will go towards the Surrendered and Abandoned Vessel Exchange grant program, also known as SAVE.

During the last fiscal year, in 2018, Division of Boating and Waterways (DBW) also reported it provided $2.75 million in AWAF funds to go toward the SAVE program.

DBW even stated it would be willing to help regional applicants apply to the program, begging the questions: Is DBW having a difficult time finding applicants to apply to the program? Has the issue not affected California the same as other areas? Is there another reason the grants are not being taken advantage of, if that’s the case?

“Abandoned and derelict vessels are a pervasive environmental and public safety problem in coastal and inland waterways. Not only are they an eyesore, destroying the beauty of the waterways, but they also pose an environmental hazard by polluting the waterways,” said Ramona Fernandez, DBW’s acting deputy director.

The Log contacted representatives for DBW to find more extensive information about which cities take advantage of the grant removal programs, but did not hear back in time for press. If any further information becomes available, it will be posted online at thelog.com or written in an article released in a later issue.

Applications for the grant program will be accepted until April 30. The deadline is at 5 p.m.

In regions such as Sacramento and Antioch, abandoned vessels have become a serious matter. There have been various news reports in recent years in which approximately 250 vessels, some large commercial ships, have been dumped.

While abandoned vessels have been reported by multiple news sources to be an issue in the Sacramento Delta Area, where is the funding going in Southern California?

The Log has reported on San Diego’s Zuniga Point many times. The area is an interesting one because it was a territory turned over to the United States Navy, who in turn has been working with the Port of San Diego to introduce an ordinance that will prevent others from abandoning vessels in San Diego Bay. However, there has not been much work – at least outwardly – on writing the ordinance since it was proposed. It’s not just boats that are dumped at Zuniga Jetty – there have been old washing machines and other junk gathering, as the area tended to be a kind of no-man’s land at one time.

In a recent report by NBC News San Diego, Navy officials said each time a boat is abandoned and the Navy has to remove it, it costs taxpayers thousands of dollars. An estimate of $20,000 was given by Naval Base Coronado Public Works to remove a single boat. Also, the agency approximated more than 90 tons of debris and 600 pounds of hazardous materials have been removed since 2017.

Costs to removed vessels can be very pricey, which could also be one of the contributing factors to why owners sometimes choose to dispose of their boats illegally. According to Trade Only Today, of the 51 commercial vessels that have been abandoned in Sacramento Delta, the cost of removal can sometimes be upwards of $30 million. Because the funding is so limited for removal, oftentimes these boats just remain in the water, where they continue to worsen in condition.

To keep the waterways and coastline safe for all other boaters, it’s important to dispose of a vessel in a legal way. At dbw.parks.ca.gov, there is bountiful information about how one can dispose of a vessel in the correct way from recycling/dismantling and through a landfill. Through DBW’s Vessel Turn-in Program, or VTIP, boaters can also make arrangements to surrender their vessel at no cost. Check with DBW or local government agencies to see if your city participates.

Are abandoned vessels a problem in your area? Leave a comment online or write a letter to editor@thelog.com to share your experience.

One thought on “Are abandoned vessels problematic in Southern California?”