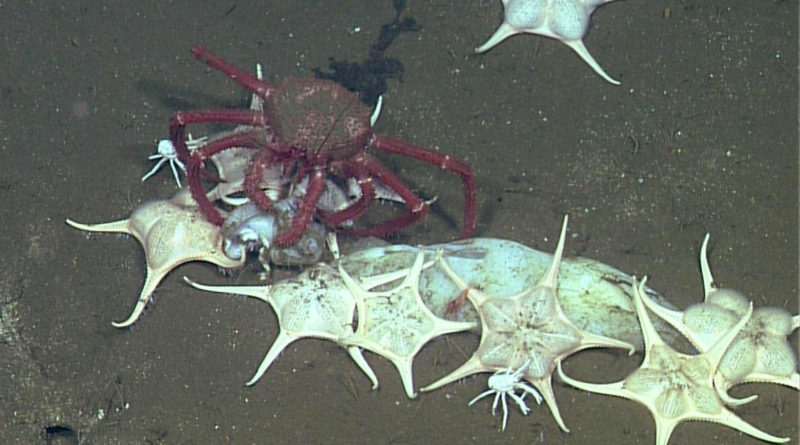 MONTEREY, California — Our oceans are a strange and unusual place. Dark and mysterious, the National Oceanic and Atmospheric Administration (NOAA) claims less than 5 percent of the ocean have been explored to date. That leaves a whopping 95 percent of the great deep unknown yet to be seen by human eyes. In terms of a peculiar event involving the Gulf of California’s deep-water squid population, some things cannot be unseen — but it may lead to further insightful discoveries.

Researchers at Monterey Bay Aquarium Research Institute (MBARI) first encountered a seabed off the Gulf of California’s coast with dozens of dead squid, “a squid graveyard.” After a frenzied breeding session, the squids die. For other sea creatures, such as starfish, ratfish, acorn worms, sea cucumbers and crustaceans, the dead squid provided an underwater buffet. As the other sea life chows down on the squid feast, most of the squid are consumed within a 24-hour period, which is what makes the graveyard so unusual to scientists since squid carcasses are rarely seen. In fact, scientists know little about the midsize carrion (decaying flesh) of smaller animals because it disappears so quickly.

In the animal world, it’s somewhat common to give one’s life to reproduce, completing a seemingly cruel circle of life. While the squid may die in the last throws of life, it is not done in vain; according to an article by MBARI, “Although the squid carcasses attracted plenty of scavengers, the egg sheets seemed relatively disturbed.”

The female squid produces egg sheets, and scientists theorize ink may be injected into the sheet making it less appetizing to predators.

There is the possibility the beginnings of this study could be a missing key to how humans impact the ocean. The lives of these deep-sea squids are unknown territory.

“The research shows the importance of in situ observation (observing a site/subject without isolating it from other conditions). The squid and their egg sacks would never have been found,” said Henk-Jan Hoving, a biologist who first encountered the squid with his team. “But if you start exploring less-known places, you will find these less-known things.”