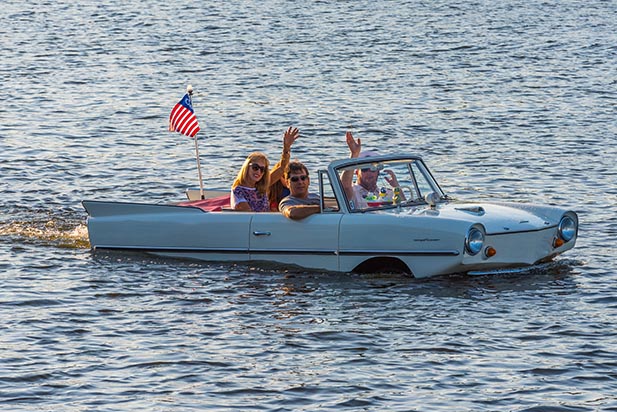 WORLDWIDE — Before the stylish Amphicar convertible drove – and floated –onto the scene in 1961, the United States Navy was the only entity to operate amphibious vehicles. Dubbed the fastest vehicle on land and water simultaneously, Amphicar 770 was first manufactured in Germany and the number meant 70 mph on land and 7 knots in water.

President Lyndon B. Johnson even owned one and it was said he used to scare his passengers by driving it straight into the lake, screaming the brakes had gone out on the car. Surely, his passengers were delighted, after being frightened half to death, when they realized the technology of the Amphicar.

“Wild” Bill Hill, a Sacramento resident and tattoo shop owner, represents California with his revamped Amphicar. Racing into the water at 30 mph makes a statement with the car, according to Hill.

One of his biggest fears is “the ‘L’ word” – leaks. However, Hill said the car, while made to be in the water, could be driven onshore if leaking occurs. This begs the question: how many Amphicars didn’t make it back to land and instead ended up at the bottom of a lake, ocean or river?

Today, there are only a few hundred of the vehicles/watercrafts left in the United States and abroad after production ceased in 1968, but they still fascinate spectators.

Disney World’s The Boathouse gives vintage Amphicar rides to patrons and The International Amphicar Owners’ Club (IAOC) holds an event annually in Celina Lake celebrating owners of these novelty vehicles. On the IAOC’s official website, it states, “We are a fairly small group with our numbers not quite totaling 400, but our enthusiasm for all things Amphibious is huge!”

To join the club, owning an Amphicar isn’t mandatory, but President Jim Golomb says, “There is always an ample amount of people willing to give rides!”

One thought on “Boating Classic Weird Edition: The 1960s Amphicar”