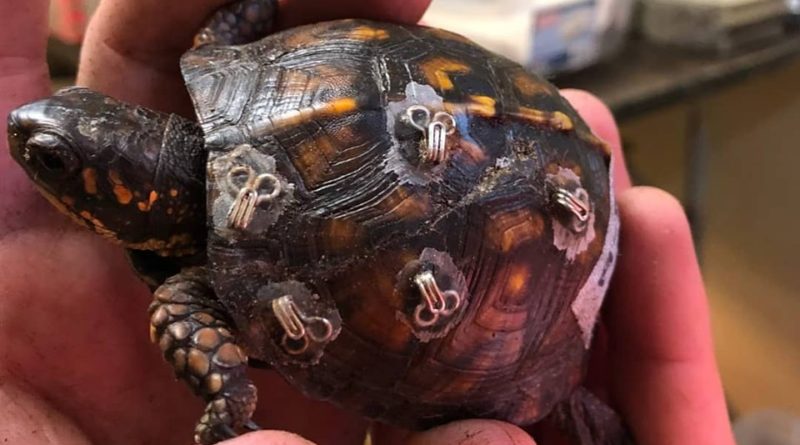 Charlotte, NORTH CAROLINA—Who knew a bra could save a turtle’s life? Sadly turtles, as slow-moving creatures, are targets for accidents with cars, lawnmowers and even boats, which can be fatal. However, the lucky turtles who come out with a cracked shell could potentially survive due to the help of a bra clasp.

According to Charlotte Observer, Carolina Waterfowl Rescue took the idea of using bra parts to heal turtles from Wildthunder Wildlife & Animal Rehabilitation in Independence, Iowa. Zip ties used with the bra fasteners pull the turtle’s shell back together as it heals. Once the glue wears down and the clasp falls off, the turtles are ready to be returned back into the wild. Some turtles are deemed not able to return to the wild, but when that case arises, the organization searches to find them a permanent home.

Carolina Waterfowl Rescue posted the call for eye closures on their official Facebook page on June 27. The original post has gone viral with nearly two thousand comments and many more shares. A video posted on July 14 shows the process of removing the wiring from a male turtle’s shell. According to the Facebook page, the animal rescues agency currently has more than 40 turtles in their care. Several box turtles, such as Freya (shown in the photo), have successfully had their shells repaired and been returned to the wild.

For those interested in helping ailing turtles, bra fasteners can be mailed to Carolina Waterfowl Rescue, P.O. Box 1484, Indian Trail, NC 28079. Size or condition of the bra is not a matter – the clasp in the back is the portion of the bra that will be used to help the turtles.