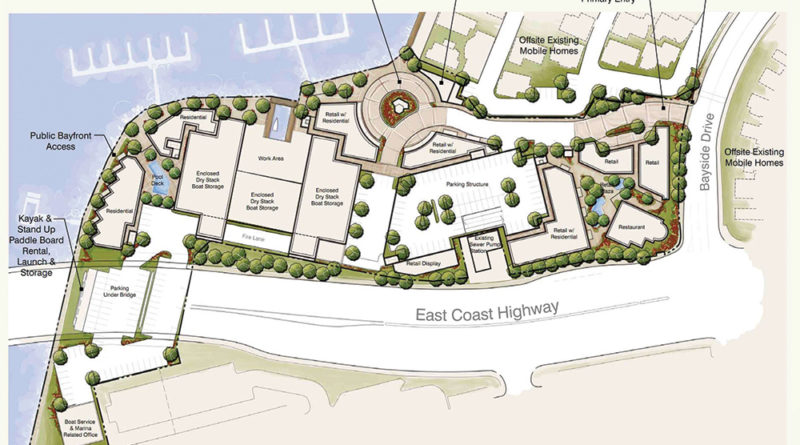 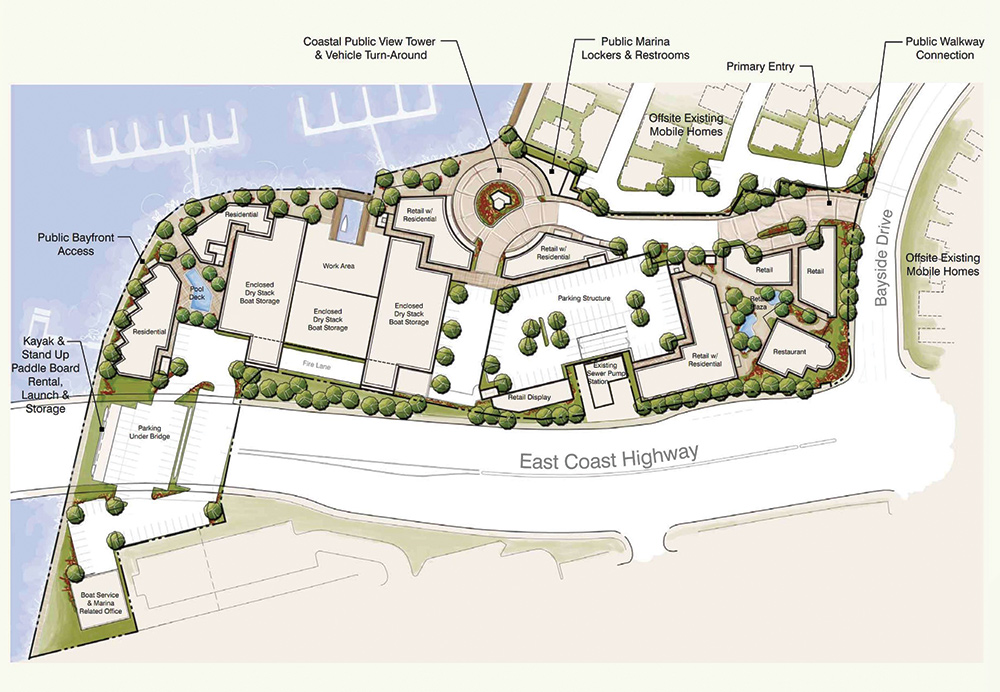 MONTEREY — At its final meeting of 2014 in Monterey, the California Coastal Commission granted Newport Beach a 12-month extension to review changes to an amended Conditional Land Use Plan (CLUP) for a proposed development in the city’s Back Bay.

The commission approved the request for additional time to “allow for a thorough review of the city’s proposed changes.” Though the time extension is for a full year, the Coastal Commission staff anticipated Newport Beach’s CLUP amendments would be ready for review at a public hearing in either summer or fall of this year.

Newport Beach submitted the CLUP as part of its plans to develop Back Bay Landing, a mixed-used waterfront village on a 7-acre parcel of land where Upper Newport Bay meets Coast Highway. Under current proposals, Back Bay Landing would, in part, be a marine-themed destination with enclosed dry stack boat storage, a marine office and other related services benefiting boaters.

“The proposed project involves land use amendments to provide the legislative framework for future development of the site [located at 300 East Coast Highway],” Newport Beach staff said about Back Bay Landing in a report.

A request for amendments to the CLUP was submitted July 11, but the Coastal Commission deemed it incomplete. The amendments, according to city staff, sought to “establish appropriate zoning regulations and development standards” to allow Newport Beach to build a mixed-use and planned community project.

A rendering of the proposed project also indicates space would be dedicated for the launch and storage of kayaks and standup paddleboards. Other features could include a public waterfront promenade, lighthouse, and locker space for a public marina.

According to a presentation by PCR Services Corp. in 2012 on the initial plans of Back Bay Landing, the mixed-use development was proposed to be a visitor-serving commercial project with commercial, marine and residential elements. City officials said the proposed development would improve upon an “underutilized bayfront site” of nearly 7 acres in size.

Almost the entire Back Bay Landing ?project would be located north of East Coast Highway, between Bayside Drive and Bayside Marina adjacent to Upper Newport Bay.

Construction was originally planned to begin in mid-2015 and be completed by the end of 2016. However, with the city still seeking key approvals by the Coastal Commission and a public hearing on CLUP amendments likely to take place in either the summer or fall of 2015, delays to construction would certainly be expected.

Should the project be realized, how Back Bay Landing would impact traffic remains to be seen, especially considering Newport Beach’s plans to make the adjacent Mariner’s Mile a more significant visitor-serving destination.

The eastern end of Mariner’s Mile, a stretch of road home to several commercial destinations, is located about 500 feet from where Back Bay Landing would be developed. At a recent planning session with stakeholders, consultants brought up the possibility of whittling East Coast Highway through Mariner’s Mile to a two-lane thoroughfare. East Coast Highway features four westbound lanes in the short space between the proposed Back Bay Landing location and official start of Mariner’s Mile.

The California Coastal Commission met Dec. 10 to 12, 2014, in Monterey and approved Newport Beach’s time extension request during the first day.

Beyond the Coastal Commission and city of Newport Beach, other agencies likely to be involved with approving financing, participation or permits include OCSD, Orange County Airport Land Use Commission and Caltrans.

Balboa Marina, which was recently a hot topic at a Newport Beach City Council meeting in November 2014, is located on the other side of East Coast Highway and could feature a public dock and slips accessible to Back Bay Landing.