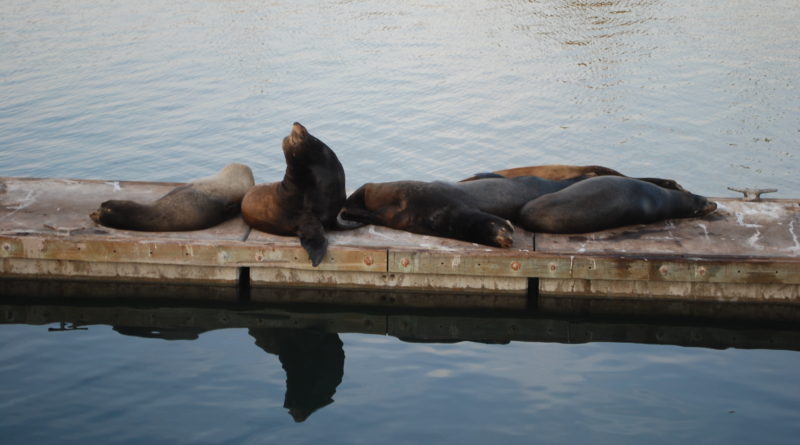 Pinnipeds are quite common at local harbors and marinas; interacting with them isn’t easy.

SOUTHERN CALIFORNIA — One of the quickest ways to become a viral internet sensation overnight is if someone captures you on a cell phone video as you’re pulled into the water by a sea lion.

Case in point: footage from a cell phone camera captured a sea lion pulling a young girl by her dress from a dock and into the water. The video was featured on various broadcast news outlets and became a social media sensation.

Fortunately the sea lion didn’t hold on to the young girl for long. An adult dove into the water, quickly grabbed her and safely relayed her back to someone on the dock. The situation, undoubtedly, could have been worse.

What happened at a Vancouver, Canada area marina is a reminder of what could go wrong when humans interact with wildlife.

Pinnipeds are a common feature at many marinas and harbors in Southern California. The California sea lion, for example, can be heard barking at Dana Point Marina or Oceanside Harbor, among other waterfront locations.

The young girl dragged off the dock in the Vancouver suburb of Richmond had interacted with a male adult California sea lion, according to news reports – similar to the types of pinnipeds boaters might come across at local marinas.

California sea lions can weigh as much as 850 pounds (males). The pinniped species can be found anywhere between Vancouver Island in Canada and Baja California in Mexico.

Background shared by the Marine Mammal Center in the San Francisco Bay Area stated the California sea lion is intelligent and playful. However, as evidenced north of the border, California sea lions are capable of putting humans in difficult or dangerous situations.

The National Oceanic and Atmospheric Association (NOAA) issued a sea lion advisory within days of the incident in Vancouver. Although the advisory was for NOAA’s Greater Atlantic region the message resonates just the same here in Southern California.

“As tempting as it might be to get that perfect shot of yourself or your child with an adorable seal pup, please do the right thing and leave the seal pup alone. Getting too close to a wild animal puts you—and the animal—at risk,” the NOAA advisory stated. “Seals have powerful jaws, and can leave a lasting impression. We have received reports of a number of injuries to humans as a result of getting too close to an animal during a quick photo op.

“When you get too close to a wild animal, you risk stressing or threatening it, and stressed animals are much more likely to act unpredictably,” the advisory continued.

The NOAA advisory also warned it is illegal to harass any wild animal; the mere act of approaching a wild animal could qualify as harassment, according to federal officials.

“Under the Marine Mammal Protection Act of 1972, harassment is defined as ‘any act of pursuit, torment, or annoyance,’ which has the potential to injure or disturb a marine animal. This can be dangerous for the animal, but can be dangerous for you, too,” the NOAA advisory stated.

Would what happened in Vancouver qualify as an act of pursuit, torment or annoyance, had it occurred in the United States? Obviously we won’t know for sure, but the incident nonetheless is indicative of what could go wrong when human interaction with a pinniped is too close for comfort.

NOAA officials, in their advisory, stated humans should maintain at least 150 feet of distance from seals or sea lions.

Of course there are times a sea lion or other pinniped engages in dangerous activity with a human without being coerced through annoyance, pursuit or torment. In April 2015 The Log featured a news story of an angler who was being photographed with a fish catch when a sea lion leaped out of the water and dragged him in – apparently because the pinniped was hungry.

The man was reportedly submerged underwater for 15 to 20 seconds, as the pinniped dragged him along. He finally resurfaced after breaking free and was treated for his injuries.

Plenty more stories of sea lions dangerously interacting with humans can be found in a basic news search online.

A NOAA stock assessment of California sea lions estimated the species’ minimum population is 153,337. Humans must inevitably co-exist with sea lions (and other wildlife beings). Giving them their space and practicing common sense are always safe bets.