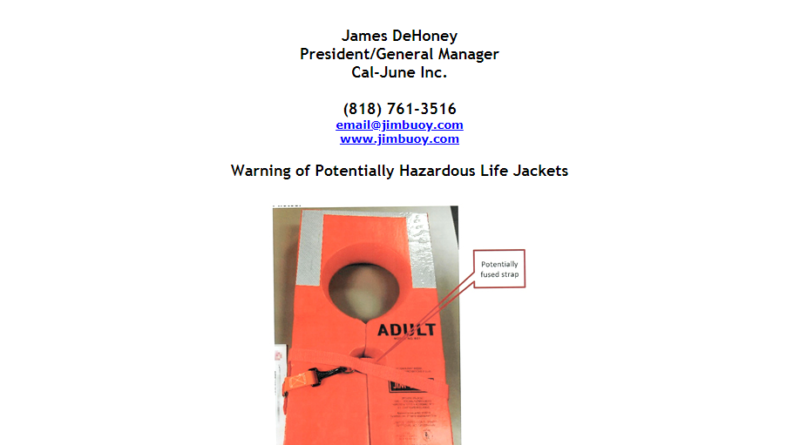 The alert states that during recent inspections Coast Guard personnel  had discovered “a significant number” of Jim Buoy Models #601 and #603 Type 1 PFDs “which were not wearable if needed during an emergency.”

Inspectors discovered that the strap had not only been secured at its fixed end, but also fused to the side where it is intended to be free to move. As a result, the user is unable to separate the halves of the PFD and get it around their head. The alert said that inspectors noted that what appears to be the PFD’s vinyl coating had adhered to the strap on the wearer’s right side of the PFD where it passes through the wearer’s right half of the jacket.

Cal-June has issued a public notice on their website at http://www.jimbuoy.com/pages/public-notice.htm that these PFDs may not be able to be donned properly “due to a potential condition where the movable strap may be fused to the vest preventing proper donning.”

These life vests are typically sold for use on commercial vessels, Cal-June said in its release. However, they are also sold to the general public online and at marine chandleries.