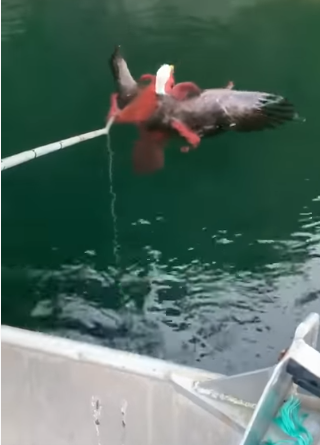 VANCOUVER, British Columbia—A bald eagle and an octopus get into a fight, who wins? Thankfully this story ends with both animals alive.

A video captured by staff of Mowi Canada West, a salmon aquaculture company in Canada’s westernmost province of British Columbia, shows a large octopus wrapped around a full-sized bald eagle on the surface of the water off the northwest tip of Vancouver Island. The video was posted on the company’s YouTube page.

Several news outlets reported the group of salmon farmers heard screeching and splashing while on the way back to their floating house on Dec. 9, which led them to the strange sight.

The group told news outlets they did not witness how the two became intertwined, but speculated the eagle had attempted to make a meal of the octopus when the roles reversed.

One of the fishermen, John Ilett, told CNN they were unsure if they should intervene but ultimately did, realizing the eagle was likely to drown if they did not.

In the video, the crew is seen using a pike pole in the water to pull the octopus over to the boat.

“I was able to just latch on to the octopus and give it a little tug,” Ilett told CNN. “It released its grip … which gave the eagle just enough time to get to shore.”

Both then went their separate ways.

“The octopus swam away unharmed and the eagle recovered on a branch for around 10 minutes before it flew away,” Mowi Canada West wrote in the description for the YouTube video.

Giant Pacific octopus can grow fairly large, with the average weight between 22 and 110 pounds, according to National Geographic. The publication said bald eagle’s weigh on average 6.5 to 14 pounds and they have an average wing span of 6 to 8 feet.