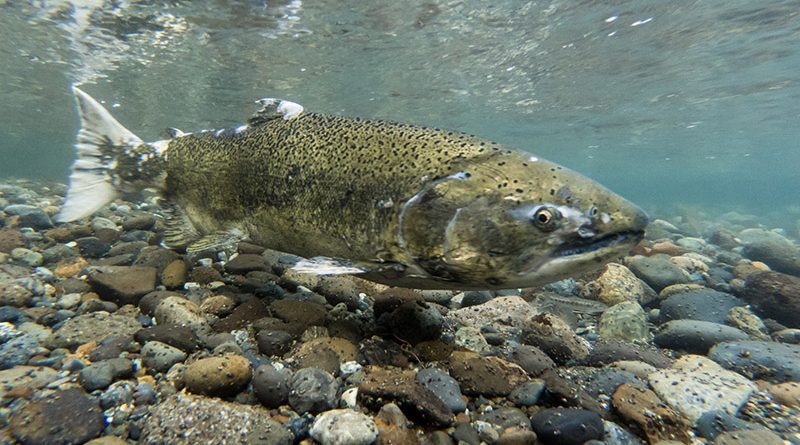 Transporting the fish to cooler waters increases the chance of eggs surviving through the summer. Shutterstock image.

In a joint news release from the California Department of Fish and Wildlife, the U.S. Fish and Wildlife Service, and the Bureau of Reclamation, it was announced that state and federal biologists had started to move threatened Chinook salmon to Clear Creek in northern California.

The creek’s colder water temperatures prompted the move, which biologists hope will better support spawning and help their eggs survive while the state is still in a drought.

Teams from CDFW and USFWS will relocate 300 adult winter-run Chinook salmon to their native habitat above Eagle Canyon Dam on North Fork Battle Creek, about 20 miles east of Cottonwood, in Shasta and Tehama counties for the first time in more than 110 years.

“This marks the first time in many years that anadromous fish have been in upper Battle Creek,” said Paul Souza, Pacific Southwest Regional Director for the U.S. Fish and Wildlife Service. “Releasing salmon to this location is critical during this third year of drought because water temperatures are cooler, and habitat is more conducive to spawning. This action would not be possible without the support of the Battle Creek Salmon and Steelhead Restoration Projects, a collaborative effort between state, federal, and private agencies.”

The operation is being coordinated by Pacific Gas and Electric, which operates hydroelectric facilities on Battle Creek; the facilities and other natural barriers can prevent adult salmon from reaching the upper portions of the creek.

“PG&E recognizes the current critical situation for adult winter-run salmon this year and are pleased to be working with the agencies to coordinate our project operations where we can support a successful movement of salmon to colder water to support this urgent action by the agencies,” said Jan Nimick, PG&E Vice President of Power Generation in the May 5 press release.

This is one of a series of actions to boost the survival of the Chinook species from drought, high temperatures, thiamine deficiency, predators, and other stressors that devastated the population the last two years in the Sacramento River below the Shasta and Keswick dams.

The transportation of the salmon builds on the “jumpstart” program, which began in 2018 with an annual release of juvenile salmon in the lower parts of the creek.

The released fish migrated to the ocean and returned as adults to spawn, demonstrating the salmon’s ability to re-establish themselves if their habitat remains cool enough for eggs to survive the summer.